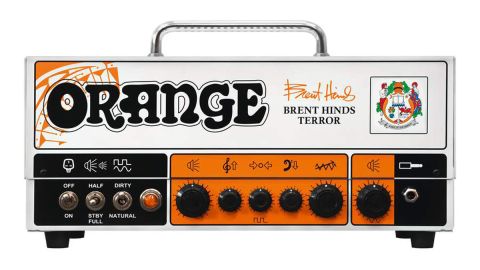 An affordable amp that packs a punch.

This year marks Orange Amplification’s 50th anniversary. In an industry where amplification brands are often short-lived, it’s a stellar achievement, more so because Orange is still owned by its original founder, industry legend Cliff Cooper.

Things haven’t always been plain sailing, but today Orange enjoys well-deserved international popularity, thanks to products that are always on target for the players they’re aimed at.

One of Orange’s biggest successes in recent times was the Tiny Terror, which sold well over 30,000 units worldwide and almost single-handedly kick-started today’s ‘lunchbox’ head trend. Although that amp was discontinued in 2016, the Terror range is still with us, and Orange has just unveiled a couple of new additions, in the shape of the Rocker 15 Terror and this very special signature version for Mastodon’s lead guitar maverick, Brent Hinds.

There are a couple of very useful output power options: a three-position standby switch lets you choose full or half power (15 watts or seven watts), while on the rear panel a built-in attenuator switch lets you choose ‘Bedroom’ and ‘Headroom’ settings. In Bedroom mode, power output drops to one watt, or 0.5 watts in the half-power setting. There’s also a valve-buffered series effects loop and a choice of eight and 16ohm speaker outlets.

The Brent Hinds head is housed in Orange’s familiar all-steel Terror chassis, which is powder-coated inside and out and features the iconic ‘pics only’ graphics first used way back in 1972. The familiar artwork has been slightly modified, inspired by Hinds’ distinctive tattoos, while on the back there’s a Mastodon logo.

Inside the chassis, most of the electronics are housed on a top-quality PCB, with a smaller one for rear-panel sockets. Components include metal film resistors for low noise, and high temperature Carli film capacitors, with neat wiring and shiny bright solder joints; all typical of Orange’s usual high attention to detail. Make no mistake, this is a seriously tough amp that’s built to last.

While the Brent Hinds model shares the same controls as the Rocker 15 Terror, it sounds quite different, having been re-voiced by Orange’s technical director Ade Emsley to suit Hind’s personal tastes. The Natural channel is fatter and warmer, but without losing the sweet, sparkling treble and tight bass response that makes this channel such fun to play with.

You might think that with no tone controls, the Natural channel loses out in versatility; in fact, the opposite is true. Without a tone network, the simple, high-headroom circuit lets all the natural resonance of the guitar through. It’s superb with pedals or if you want to hear what classic Orange drive sounds like, you can engage the low power settings and max the volume control to hear real output distortion without risking an ASBO - but beware: even on 0.5 watts the Brent is still indecently loud.

The Dirty channel adds a lot of extra gain, more than the Rocker 15 Terror and perfect for the heavy riffing and power leads that contribute to the Mastodon sound. This channel sounds great with single coils, but really needs the punch of a good humbucker to set it on fire, creating thick distortion tones.

It’s often the case that signature amps lose out on flexibility with tightly focused sounds that aren’t so accessible. That isn’t the case with this particular head, though. As long as you like metal and modern rock, you’ll love this particular collaboration; it’s full of shred-tastic fun, contrasted by a wonderful clean channel that’s practically perfect for pedals.

Players looking for more clarity and a slightly more classic-rock bias should check out the amp the Brent Hinds Terror is based on, the equally covet-able Rocker 15 Terror. These very aspirational heads are under £600, making them affordable, too.