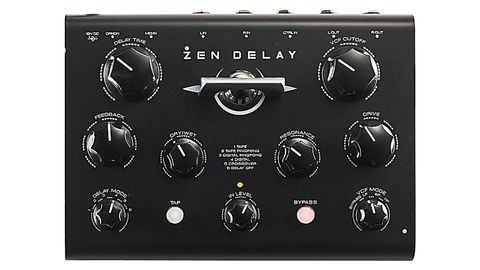 It’s not cheap, but the Zen Delay is musical, powerful and could become your secret weapon in the studio or the DJ booth

Apparently inspired by a visit to this year’s Superbooth in Berlin, Zen Delay is a desktop effects unit designed by Ninja Tune co-founder Matt Black and friend Dr Walker, and brought to life by Latvian hardware outfit Erica Synths.

It’s described as the “first-ever hardware effects unit produced in collaboration with an electronic music label” – although Mute has released two synths and Ghostly has collaborated on a PO with Teenage Engineering, so label/hardware hookups aren’t new.

That’s neither here nor there though; within minutes of using Zen Delay it’s clear that this is much more than a mere gimmick. This is an excellent effects box, perfectly tuned for electronic experimentation and – as we’ve come to expect from Erica – capable of seriously meaty filtering and distortion.

The Zen Delay is a stereo digital/analogue device, the former element being the DSP-powered delay, the latter a multi-mode filter and valve distortion. This combo of approaches works really well. The digital delay offers a lot of flexibility, with five modes – tape, tape pingpong, digital digital and crossover – each offering its own distinct character.

The delay time is wide-ranging too, stretching from 1 to 5000ms in unsync’d mode, and up to eight times the incoming clock signal in sync’d mode (maxing out at 50s).

Combined with the feedback control, it allows for everything from short chorus and comb filter-like effects to speaker-threatening walls of drawn-out feedback. The analogue elements then do a good job of adding weight and grit to the signal. The 24dB filter has high-, low- and band-pass modes with rotaries to control cutoff and resonance.

Much like the filter found on Erica’s Polivoks-inspired Acid Box, even a little resonance here is great for adding frequency-targeted weight, imparting real heft at the cutoff point that works particularly well for turning low-end material into throbbing sub basses.

The valve drive is an inspired touch too, allowing the Zen Delay to act as a very musical distortion effect even with the filter and delay bypassed – although it also complements both elements nicely.

The hardware itself is, again, reminiscent of Erica’s Acid Box – stylish and rugged, with good-sized controls, great for manipulation. The centrally-placed valve adds an extra visual flourish here, giving the effect an almost steampunk look. The stereo in and output jacks on the rear are accompanied by MIDI and CV inputs for sync and control, which add to the effect’s appeal as part of a DJ or live hardware rig.

If we’re being fussy, it’s a shame there’s no LFO here for some automated internal modulation, but the hands-on ethos suits the effect. We really like the Zen Delay; designed by and for boundary-pushing musicians, with features and controls ideally tailored to creating warped dub effects, intense builds and out-there grooves.

What could have been a simple branding exercise has resulted in one of the best hardware effects of recent years.

MusicRadar verdict: It’s not cheap, but the Zen Delay is musical, powerful and could become your secret weapon in the studio or the DJ booth.