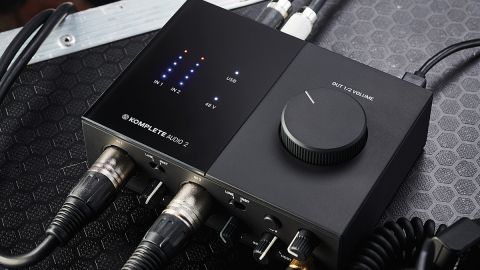 A super compact, slick 2x2 interface at a competitive price. The NI pedigree shines through in build quality and performance.

Komplete Audio 2 is one of a pair of new compact USB 2.0 bus-powered audio interfaces from Native Instruments (the other being Komplete Audio 1).

Both follow a similar desktop style design to their long-established Komplete Audio 6 unit, which is also getting an update. However, the new interfaces are smaller, lighter and visually slicker, and although there’s no onboard MIDI like the Audio 6, the maximum sampling rate has been increased to 192kHz.

Komplete Audio 2 is a two-input, two-output design with two identical mic/line/instrument inputs. Connections are on space-saving combi XLRs with individual selector switches to select between line and instrument. 48V phantom power meanwhile is engaged globally via a single switch. In addition to the inputs, the front panel includes a hardware monitoring balance knob (Input/Host) and headphone output with independent control.

It’s always interesting to see how each manufacturer implements the hardware monitoring, and here Native Instruments has made the headphone level and monitoring balance totally independent of the main outputs. This means the main outputs only carry outputs 1&2 and are not influenced by the hardware input/host balance, and the headphones are not influenced by the output 1&2 volume.

The main output level is controlled from a large output level knob on the top panel. Here you’ll also find the input meters, alongside phantom and USB indicators. The input meters are 5-part and offer a refreshing change to the single multicolour type that compact interfaces usually opt for. What’s more, their top panel positioning is, we feel, a bit more practical. Finally, round the back you’ve got the USB B connector, a pair of balanced outputs on TRS 1⁄4” jacks and a Kensington Security slot. The USB B socket is nicely recessed on the back panel, so once plugged up there’s no fear that the plug will get knocked out.

The feel of the Audio 2 is great, with the rather tactile rubberised knobs overcoming the slightly fiddly nature of its compact layout. Labelling is also clear, though there is no scaling anywhere, including the meters, which is maybe a little too minimalist. There’s also no external PSU option, further emphasising the mobile and laptop target market. However, with the unit fully loaded, there are still plenty of leads to contend with, so you don’t really miss the additional power cable.

The performance of the Komplete Audio 2 was as slick as its looks, and though the features are basic it does what it sets out to do admirably. It feels robust enough to handle regular use and is clearly small enough to stuff in a bag alongside various other bits and bobs.

The price is also very competitive, and if you need a bit more persuasion there’s a decent package of bundled content that includes Ableton Live 10 Lite, Maschine 2 Essentials, Monark synth, Phasis phaser, Replika delay and Solid Bus Compressor. Plus once registered, you can grab other free NI content such as Komplete Start production suite. All told the Komplete Audio 2 is both stylish and great value.