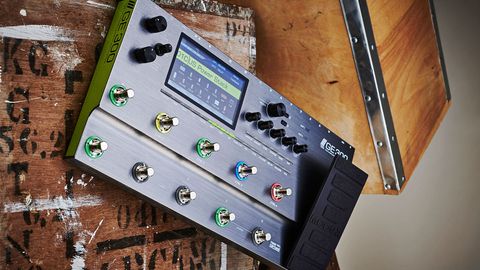 Mooer's GE300 is a slightly more affordable approach to high-end multi-FX, and a worthy competitor to Line 6 and Boss.

There’s also the Synth Engine, a new tri-voice polyphonic synthesis module with options for wave form, pitch, filters and arpeggiators, plus a Tone Capture feature and a ton of I/O options.

Although the GE300 faces considerable competition from the likes of Line 6, Boss, HeadRush and Fractal Audio, its impressive array of amps is hard to fault, spanning Fender to Marshall to modern US-style models.

The onboard impulse responses certainly deliver, while the array overdrives, distortions, modulations, delays and reverb do a decent job of emulating the original effects.

While the Line 6 Helix LT has a greater range of effects, and the HeadRush Pedalboard's touchscreen makes it a more immediate unit, the Mooer GE300 delivers on both the amp and effects front, which makes it more of an all-rounder than some of its competitors - more exploratory guitarists will love the fully featured polyphonic synth, too.

The GE300 marks a notable step up from Mooer, with a smaller footprint than its rivals and rock-solid build quality. Its tones and feature set may not position it miles ahead of its rivals, but it's certainly worth weighing up if you're in the market for a Helix or similar, particularly if synth and amp sounds are particularly important to you.

MusicRadar verdict: Mooer's GE300 is a slightly more affordable approach to high-end multi-FX, and a worthy competitor to Line 6 and Boss.