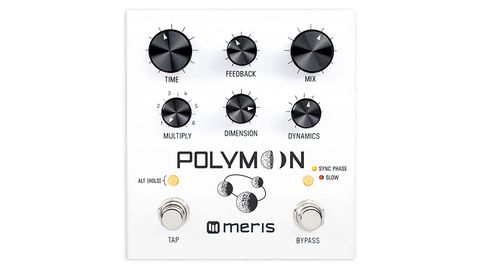 This our current favourite altered delay pedal. With a cornucopia of sounds to explore, the Polymoon is a delightful confection of delay and modulation that never ceases to amaze.

Unlike  the first Meris stoboxers, the Ottobit Jr and the Mercury7, both based on 500 series studio rack modules designed by the company, their newest addition, the Polymoon, seems to have started life purely as a pedal, having no equivalent module.

Described as a super-modulated multiple tap delay, the inspiration behind it came from sounds created by cascading the rack delays that were prevalent in the 1980s, particularly in the way that Allan Holdsworth and Frank Zappa used those units.

The Polymoon takes that further with its ability to modulate and morph every single parameter. With various options for stereo or mono use, the signal path starts with a pair of dynamic flangers in parallel feeding the multi-tap modulated delay before hitting a pair of barberpole phasers. The delay section features six lines, each with its own modulation source (LFO) and plenty of options for modulation.

Six knobs shape the Polymoon’s sound but each has a secondary function, accessed by holding down the Alt button; the Feedback knob, for example, provides global feedback for the delay network but has the secondary function of tilt EQ filtering making the repeats darker or brighter. This is a pedal that rewards experimentation but a thorough knowledge of what the knobs are doing, particularly the alternative parameters, is key, as subtle changes in their juxtapositions can take you off on different creative tangents.

You can start with straight digital delay using the Time, Feedback and Mix knobs in the conventional fashion, perhaps with some of that EQ dialled in. The Multiply knob then selects the six multi-tap options, each progressively more complex and the Dimension knob adds reflections to the repeats, creating a smearing effect and conjuring up reverb.

With extra fine-tuning over the delays via another secondary parameter, there’s plenty for delay and ambience fans but you also have the option of adding flanger and/or phaser to the mix. The whole signal path has pristine quality and these two are classy effects that integrate brilliantly with the delay to bring dreamy movement to the sound. It’s especially effective in stereo as the taps bounce across the spectrum and the twin phasers travel and regenerate in opposing directions, creating a wide field.

Now, while all that may sound straightforward enough, whole new layers of complexity appear when you get into modulating the six triangle LFOs associated with the delay lines. Alt mode for the Time knob and the Multiply knob each allow selection of 16 variations of LFO modulation for the early delay taps and the later taps respectively.

The variations include different speed and depth combinations, FM modulation and dual pitch shifts - all layering in different aspects of textural fairy dust. You can call up floaty soundscapes, otherworldly crystalline ambiences and constantly shifting pad sounds that will evolve from a single note or chord. While there’s plenty of huge upfront effects, the humble Mix knob is there to play its part and there’s a world of subtlety to be explored in layering some of those carefully constructed FX just behind your dry sound.

There’s so much variation here that you’ll definitely want to return to certain sounds that you dial up and the Polymoon’s 16 internal presets will let you do that, although you can’t access them from the pedal alone - you’ll need to send the pedal MIDI Program Change messages to get to all 16. Instant access to four presets is also available by using Meris’ forthcoming footswitch.

An expression pedal can control all parameters simultaneously opening up the way to a ton of performance options but as it can morph between two complete settings of all of the knob values (primary and secondary) you can, in effect, have different ‘presets’ at heel and toe. Control of all parameters as well as preset switching is available via MIDI.