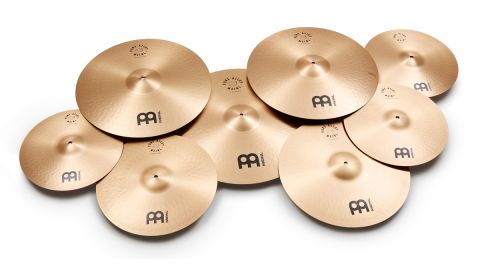 As the name implies, the Pure Alloys have a clean and focused sound, especially the hats and crashes. The rides are more complex and initially quite aggressively sharp.

The four Classics series, for example, have clarity and cut and are “Loud, louder, loudest”! While at the other end, the Byzance family has “Six degrees of darkness”.

Newly-positioned right in the middle of these two are the Pure Alloys, described as having “shimmering clarity”. So we really know where we stand.

The top sides are finely lathed and then smoothed over with a tasteful shiny finish, plus small hex-circular computerised machine hammering all over except for the bells. Underneath, the lathing is also fine but not smoothed.

Meinl is well known for its edgy, raw finishes and this Pure Alloy range is much more classic looking.

The Pure Alloy of the title actually turns out to be B12, a sheet bronze with a medium (12 percent) tin content that featured in Meinl’s recently discontinued Soundcaster series. The consistent, reproducible, hi-tech manufacturing methods of the North Europeans lends itself to the clear, consistent sound of the Pure Alloys.

The hi-hats feel more like medium-heavy than medium weight. The thing about a pure sound is that when you play the hats closed they inevitably sound rather dry, the damped clarity rendering them ticky and discrete. But you only have to open them up a bit and the full vivid roundness asserts itself.

Both pairs sizzle nicely when just fractionally opened, powerful enough and yet controlled. All the same, the 15" pair has a little more character by virtue of being fatter and more assertive.

Mounting the two rides alongside the 15" hats, the first impression is of their zingy, attacking brightness. Brightness is often no bad thing in a cymbal so long as it’s not jarring.

Just as you may tune your toms a bit toppier because the perceived pitch drops drastically as you move away from them, so the same happens with cymbals. That extra lash of high-end ping is what enables them to cut through the racket of an electric group.

We do think these rides are cymbals for amplified, rocking bands. Although they are reasonably versatile we don’t see them as traditional dark jazz cymbals like some of Meinl’s Byzance models. Stick clarity is superb, but it also stimulates a mellifluous spread.

The toppiness can distract your attention from the rest of the sound, so that you may not realise at first that there is also a big wash steaming along underneath.

With the 20" ride that wash is indeed mostly pure, while with the 22" there is additionally a hint of something of a more exotic, dusky flavour. The strong stick response works especially well with a slightly heavier stick and a thicker bead. The latter helps broaden the tone, which can be rather thin and piercing since it is so far removed from the deeper and warmer wash that is spreading beneath.

A lighter, thinner stick fared less well because of this effect. As with the well-defined stick response, so the bell also feels somewhat detached from the ride sound. With a hard ‘ting’ both bells are strong and cutting.

Thus, although the initial feeling was that both rides are a bit shrill, as we got used to them we realised that their sharp drive will appeal to many. They also have a good dynamic range, so you can play from soft to loud and get a sure response all the way up.

Nevertheless, we feel it is when you get to the crashes that the Pure Alloy sound fares best. All three crashes have a rounded whoosh, rich and translucent. The 16" has a lovely sweet tone, arriving quickly, but also possessing warm depth. The 20" has a mixture of highs and lows. There’s a fruity top to it and - because of its size - a fullness and sustain the other two don’t quite reach.

Occupying a perfect medium place, the 18" sits between the speed of the 16" and the plummy complexity of the 20". It has the luscious purity and clarity of a quality cymbal with none of the grating overtones of a second-rate cheapie.

Boasting a clean sound, Pure Alloy is an apt description for the series, certainly for the crashes and hats if not quite so much for the rides, which after all you do expect to be rather more complex.