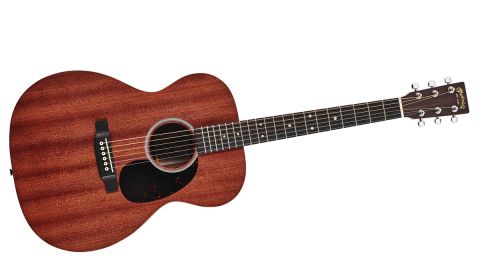 A beautifully made, well-performing guitar.

Aren’t guitars amazing? Rarely are you faced with designs that are still doing the business more than a century later.

Okay, the Martin 000 didn’t become a steel-string until the 1920s, but that body style was around for decades before. Sure, the dreadnought wasn’t an official member of the Martin catalogue until 1931. It did, however, first see the light of day in 1916 when Martin produced it as a special order for the Oliver Ditson Company. So, nitpicks aside, these designs have stood the test of time.

Despite their differing body styles, these guitars have some things in common, such as their satin-finish select hardwood necks. Martin was one of the first acoustic brands to experiment with responsibly sourced alternative materials. If ‘select hardwood’ sounds vague, in practice whatever timber Martin has sourced for the Road Series necks looks good and feels stable.

Then there’s the fingerboards and bridges cut from FSC Certified Richlite. Designed as an alternative to ebony, this material is made from recycled sheets of paper soaked in a phenolic resin and exposed to high pressure and heat. The result is a tough product that will never shrink or warp. Its use is approved by the Forest Stewardship Council, an international body established in 1994 to promote responsible management of the world’s forests.

Other shared features of these Road Series models include equally eco Corian top nuts and compensated GraphTech Tusq bridge saddles, plus 20 medium frets and a 406mm (16-inch) fingerboard radius. Each ’board features ‘Mother-of-Pearl Pattern’ dot inlays, which suggest they are faux- oyster jobs... Meanwhile, you might have noticed the ‘E’ at the end of each guitar’s model designation. Yes, you get a fantastic Fishman MX-T pickup and preamp with these guitars. More on that in a bit.

Today, we’re focusing on the 000-10E. The guitar’s top, back and sides are formed from solid sheets of sapele. This African wood is often used, not least by Taylor, as a more eco-friendly alternative to mahogany. Its light-coloured grain is punctuated with thick darker stripes that contrast beautifully with the ebony-like fingerboard and bridge, plus the ‘Faux Tortoise’ pickguard and a simple white multi-stripe soundhole rosette.

This isn’t the first time we’ve reported on the Performing Artist neck shape and High Performance Taper fingerboard combo. Thanks to some misunderstanding via online forums, these crucial dimensions can stand a bit more exposure here. The High Performance Taper has nothing to do with the neck profile. The Performing Artist thing is the profile, a slim C shape that’s neither too fat nor too thin. It’s not a million miles away from a Taylor neck feel.

The High Performance Taper refers to how the fingerboard width progresses from the nut to the body. Traditionally, Martin 000 and dreadnought models had a 43mm nut width. Our Road Series feature a 44.45mm-wide nut. That additional meat makes for the comfortable string spacing that modern players like us are particularly fond of. Now, some 44.45mm nutted models have a bridge string spacing (E to E) of 58.7mm. As the fingerboard tapers between those two measurements it can make it feel a bit unwieldy to some players as they progress toward the 12th fret. The High Performance Taper narrows the bridge string spacing to 54.7mm. This offers more of a contemporary feel. And for ‘contemporary’ read ‘comfortable’.

Some users describe the Performing Artist/High Performance Taper setup as having an electric-guitar feel. For us, the 44.45mm nut takes us out of that mindset. There’s no question we’re grappling with an acoustic guitar here. It just happens to come fitted with an exceptionally playable neck.

The diminutive 000-10E is at its happiest when you tickle its strings with your fingertips. Okay, you don’t get the imposing bottom-end of the recently-reviewed D-12E, but the 000’s lively midrange and warm treble of the top strings make for an addictive package for roots stuff.The response is what we’d expect from a mahogany body acoustic. Projection is terrific. Once again, sapele’s qualification as a noble stand-in is well justified. This will be a great guitar for the recording studio, especially if your talents stretch to folk and Delta-style blues.

Fishman’s new MX-T preamp is a blast. Running in connection with the brand’s Sonicore under-saddle pickup, it features a master volume, master tone, a phase switch (the feedback killer) and an onboard tuner. All are neatly stuffed inside the soundhole.

The tuner’s LED screen faces towards you through the treble strings when the guitar is hanging from a strap, or in the seated position. Press the on/off button and the amplified signal is muted. Once tuned, hit it again and you’re back in business. There’s no thumping noise when you switch on or off. The volume control is self-explanatory. The tone is a bit more of a conversation piece. Rolled off, you get a flat response. As you turn the control up, the bass and treble frequencies are boosted while the mids are lightly scooped. This mimics what most guitarists do with electro-acoustics.

Reviewing new acoustics comes with a caveat. We’re encountering an instrument in its infancy, so we have to judge what it is now, not what it will become. To be fair, Martin has done everything possible to futureproof the tone here. Solid woods make all the difference. Thanks to experience and precedence, we can assume this guitar will grow old gracefully. As it stands, it’s off to a great start.