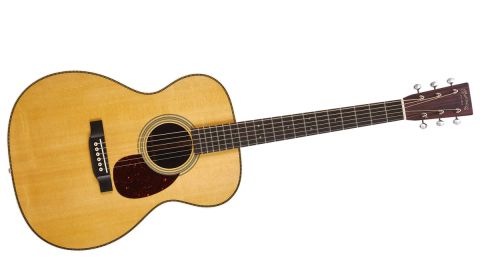 A year short of 90 years on and Martin has brought the OM bang up to date, with a combination of player-focused upgrades and some of the vintage-accurate appointments we crave.

We’ve reviewed several instruments in Martin’s Reimagined range, so an in-depth description of those reimaginings is probably not required here.

It’s good to see Martin giving a bit of love to its Standard line, and not just concentrating on the super-high-end stuff such as the Authentic and signature models. It started with the upgrades to the now-brilliant D-18 and - as this is the bread-and- butter of the company’s output - deserves to look right, play right and sound right.

Materials-wise the usual 28-style appointments apply with solid Indian rosewood back and sides, Sitka spruce top and bracing, and ebony fingerboard and bridge. It also has what Martin calls a ‘select hardwood’ neck - which looks much like the mahogany it always was but is now perhaps the African variety or Spanish cedar, a renowned and very mahogany-like tonewood.

Headstock overlay is rosewood too, while nut (44.45mm) and saddle (intonation compensated) are both bone. The tuners are Schaller’s take on the classic open-gear Waverleys found on Martins of yore. Overall build, as you would expect for almost three grand, is superlative in and out, although the rather pointy corners of the bone nut would benefit from a slight rounding off with fine silicon carbide paper or a gentle file.

As Martin’s most elegantly proportioned design, the new OM-28 ticks every box. Unlike rival Gibson’s more overtly styled offerings, everything about it whispers subtlety and taste. Its curvy outline is enhanced by the attractive herringbone binding and dapper ebony fingerboard with neat abalone ‘diamonds and squares’. Even the rosewood headstock overlay and faux-tortoise pickguard require close scrutiny to really appreciate their beauty. The top’s tinting, too, is down-played and looks more realistic than some of the ‘fake tan’ Martins we’ve seen over the years.

Nazareth has gradually modernised its neck shapes, and the ‘high-performance taper’ that adorns many recent instruments is a case in point. Often misconstrued as referring to neck profile, it actually describes the fingerboard’s taper from bridge to nut. On past 44.45mm-nut-width Martins the string spacing at the bridge was 58.7mm, but the high-performance taper reduces this to 54.7mm, with the 12th fret narrowing commensurately.

Though this appears nominal to say the least, such tiny changes can make a real difference upon playing the instrument - say, when capoing at the 5th or 7th fret, or playing speedy changes higher up the neck, as players who use open tunings commonly do.

As a quick aside, some people get confused between the similar-looking 14-fret 000 model and the OM. The important difference is in the scale length, with the 000 shorter between nut and bridge saddle (629mm compared to the OM’s 645mm). So while the 000’s playability is a tad easier, and bluesy string bends less of a struggle, the OM’s slightly tauter strings make it sharper toned, perhaps less earthy but slightly better as a strummer. These are generalisations, of course, but, overall, the OM is perceived as less of a specialist and more of an all- rounder than the 000. The 000’s nut width is narrower too, at 43mm.

With all this in mind, the Reimagined OM is an absolute joy to play. First port of call is, of course, the open-position shapes that we spend most of our time on, and here the wider nut provides bags of space for comfortable chording. Put a capo on at the 7th fret and it certainly felt easier to play than a D-28 Authentic, which is not only wider but deeper at that point. This lesser flaring with longer scale may also make the perceived difference between near-the-nut chords and those fretted further up less apparent, but you’d need to play one and make up your own mind about that.

Sonically, the OM is an interesting mix. Having been lucky enough to play several new Martins while on a recent shopping trip, our perceptions of how each guitar was expected to sound rang absolutely true. Against an identically spec’d Reimagined D-28 the tone is more focused, with slightly reduced bottom end, but more pronounced mids giving the OM projection and real cut-through - exactly what it was designed to do in the orchestras of the day (staggeringly, the model was first ‘imagined’ just a decade after WWI).

This does give it a less ‘warm and cuddly’ voice - indeed a mahogany D-18 that we also tried, would probably prove a better sofa companion and all-round good egg. But if you require an instrument that does what the OM does, which is to project your fingerpicking, strum like a trimmed-down dreadnought and punch right through the mix, then you’d struggle to find a better choice.

It’s bonkers to think that the guitar you see before you was designed in 1929 as a request from dance-band-leader Perry Betchel, who felt his Gibson L-5 wasn’t cutting it. Martin named its new creation - the world’s first 14-fret steel-string flat-top – the Orchestra Model to entice other band musicians away from their archtops and banjos.

A year short of 90 years on and Martin has brought the OM bang up to date, with a combination of player-focused upgrades and some of the vintage-accurate appointments we crave. In the process - which for company president Chris Martin was as harrowing as Coca-Cola changing its flavour formula - they’ve hit bullseye. Today’s OM-28 is everything the picker-strummer could want in a premium-quality medium-sized acoustic, and perfectly fulfils those criteria of ‘looking right, playing right and sounding right’.

In a recent acoustic band performance with cello, Gibson Hummingbird, cajon and three-part harmony vocals to contend with, our OM took on the role of accompanist, soloist and out-and-out chord belter with such ease and assuredness that one now resides in this reviewer’s own armoury. And while that is of course the classic guitar-mag cliché, it’s also not a bad endorsement.