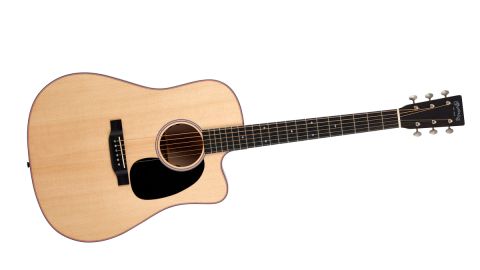 This guitar proves to be a really interesting chapter for the Martin story.

The diversions from Martin series norms aren’t just enthusiastic marketing spiel aimed at collectors looking for an excuse to splash out. The company has been using the word “modern” to describe some of the appointments here, and it’s hard to argue.

This non-cutaway dread’ is particularly attractive; the sycamore’s grain on our example is dramatically contrasted in its texture. The binding won’t be to some traditionalist tastes, but Martin has given its context diligent care.

There’s a flow to the design - even the mother-of-pearl inlays take on more of a silvery quality in this context - and it continues from the neck heel to the neck binding, and another addition to the Martin design palette: Schaller’s 1:18 ratio GrandTune butterbean tuners in a new Satin Pearl finish.

This isn’t just a case of fresh cosmetics; the dimensional and tonewood choices are where things get seriously intriguing.

This guitar has Martin’s 000 shape depth and a shallow depth brings them closer to the player; our strumming arm isn’t reaching around as much body mass. It’s just as significant on the strap, and would certainly be less of a contrast when switching from an electric, mid-set. Moreover, this guitar has an immediate comfort that could help them ‘disappear’ for the performing singer/guitarist.

This model sounds very much like a Martin dreadnought in terms of projection and shimmery, chordal highs, but the low-end is balanced in this mix rather than lacking.

The choice of homegrown sycamore for the dreadnought models is an unusual move, but one that could prove more popular in the future in terms of sustainability. For now, its backstory with Martin is relatively brief. It’s a hardwood previously only encountered on hand- picked Custom Shop models, but in the industry, it’s been historically used in the construction of flamenco guitars and is a close cousin to maple.

In comparison to the recently-reviewed D-16, our DC-16E isn’t quite as resonant in the low-end, perhaps due to the reduced body mass, and this in turn allows more of a 000 nature in the high midrange to come through.

A casual observer could assume Martin can only really stretch out into new territories in the entry-level side of the market now, having mastered its identity in the higher end of guitar design.

But this addition to the 16 Series suggests otherwise. The new features offered here reflect a consideration for offering distinct guitars that contribute to the company’s traditions for providing pro-level instruments that are built to be lifelong playing companions.