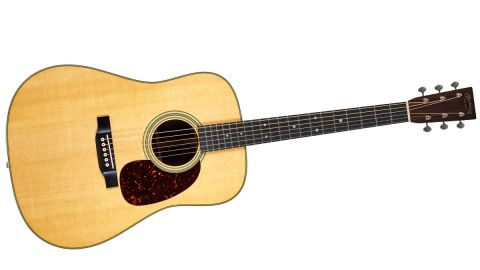 In looking back at its own history, Martin has made this D-28 the most attractive yet.

Can we guitarists really be blamed for being so conservative with our tastes?

Ted, Leo and Orville got a lot of things right early on. Predating all those icons of electric guitar design of course was Christian Frederick Martin. The evolution of the flat-top acoustic owes a huge debt to the work of his company, bringing X-bracing structure to the fore and in turn the popularisation of the steel-string guitar.

Eventually this would result in the company’s next breakthrough and most iconic acoustic design of all time, that created the blueprint others would follow; the dreadnought. And by 1931 it had been distilled into what many consider the ultimate expression of the form with the Martin D-28.

A rosewood/spruce model that’s passed through the hands of greats including Neil Young (who owns Hank Williams’ old 1941 model), Clapton, Joni Mitchell, Elvis, McCartney, Lennon, Dylan and Cobain. And so many more.

‘Reimagining’ such a guitar could be a poisoned chalice. The sense of balance between innovation and heritage for Martin needs to be perfect - you can feel the gravity of that 184 years of history in their high-end guitars. So how does a company approach changing such a well-loved and familiar design without threatening the very qualities that attracted players in the first place? We’d best take a look and listen.

The concept here isn’t new to Martin. Even Christian’s great-great-great- grandson and company CEO Chris F Martin IV admits to us, “Everything that we’ve done to the new D-28, we’ve been doing to other models.”

Five years ago, its other leading dreadnought, the D-18, gained the forward-shifted bracing and a wider nut like we now have here. The new D-28 has also seen the vintage-style aesthetic changes of its stablemate; drawing on its own history with the aged toner to recall the pre-war models (that also had forward-shifted bracing) and the white binding has also been replaced by an antique hue.

While some players may still favour natural blonde, opening the case to take in the sight of the shimmering gloss on the flawless top grain makes us firm fans. The binding’s off-white hue softens the edges slightly, compared to the previous standard model, and there’s a new bevel-edge faux tortoise scratchplate replacing the black, but this is a dreadnought design that still echoes through the industry and remains strongest here at the source.

Our test model is a relatively lightweight acoustic and this, combined with the dimensions, make the first impressions welcoming. But it’s the new neck design that really makes this the most comfortable and accessible dreadnought playing experience we can remember for some time.

Martin has followed player demand for slimmer profiles with its modified low oval design, and here it works to settle us into the new experience of a wider nut width (44.45mm from 42.86mm) and string spacing at the bridge (54.76mm from 53.97mm) for the D-28. The tactile satin finish certainly helps too and it’s easy to see this guitar expanding the D-28’s appeal to those who draw on fingerstyle or just want a little more space.

The balance between profile and spacing feels very well considered here. The difference is noticeable if you’re coming from a ‘traditional’ design; with the lower profile our palm is able to get closer behind our fretting fingers, and the more tactile control and upper fret confidence results in making this an addictive guitar to play. Faster too, if required. It’s hard to go back when A/B’d with our D-15M.

We’ve heard boomier dreadnoughts, even louder ones, and models with more dominant hi-fi qualities in the top end. So why is this D-28 one the finest we’ve heard this year? Well, starting at the top, the benefits of forward-shifted bracing can often be the subject of some debate. As with any tonal matter, it’s very much in the ear of the beholder, but physically the change allows more top movement. And we’re hearing a strong projection across the board.

As we strum our first chords, it’s not made our reimagined D-28 significantly boomier in the low end especially; instead a more preferable balance emerges that maintains the very definition of an ‘all-rounder’.

Rhythm playing reveals a harmony across the tonal spectrum with projection that feels like more than the above oft-used phrase for dreadnoughts describes; this D-28 has the confidence in its clarity we’d hope for from a new model with this heritage.

Notes ring out with sustain - that clear piano-like definition we love from Nazareth’s craftsmen. Harmonics come easy and, with strumming, the high mids and treble have choral qualities that don’t overshadow the lower mids. It’s a great recording guitar as a result - the strummed qualities lending well to placement in a mix with vocal.

Its balanced character also allows more audible control over where we choose to place emphasis in our chord work; the result is an expressive playing experience that’s a reminder of why the D-28 has become regarded as a workhorse in studios over the years. Our hands do have to work a little harder with the .013-.056 Martin strings this ships with. Tuning down half a step to simulate the tension territory of 12s, the reduced pull might be preferable, especially if fingerstyle is your chosen playing style.

While the Martin line continues to diversify with guitars like the HD-28, there’s still a weight of expectation on its forebear models. Players expect changes to be justified, and the old adage, ‘if it ain’t broke...’ springs to mind. But an update doesn’t always equate to modernising. In looking back at its own history, Martin has made this D-28 the most attractive yet.

The new neck profile also adds comfort and space for the digits, thanks to the wider nut, but D-28 diehards have no need to fear that the changes Martin has made to the recipe here will result in an entirely unfamiliar touch or feel. True, the overhaul may not suit everyone but for us it’s made the D-28 playing experience even better.

The effect of the change to forward bracing is harder to quantify; the exact nature of the character between each individual acoustic can mean ‘greater vibration’ takes on varied results. But the sense of balance in projection here is what we hoped for.

This is a pro guitar you can grow older with and that comes at a price: post-2016 increases especially have given customers at this end of the market even greater cause for pause. Nevertheless, our test model still largely feels like the acoustic equivalent of Leo’s Stratocaster design. Just as that outline is most synonymous with ‘electric guitar’, so to the D-28 continues to embody the dreadnought in look and sound. It’s good to see some things don’t change.