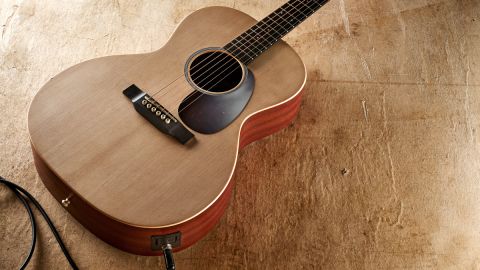 A reminder not to come to hasty conclusions based on spec alone.

With recent years seeing Martin and Taylor aim for the hearts and minds of new, younger players with their respective Dreadnought Junior and Academy models, it’s easy to assume the entry level of the market is a new focus for them.

But that’s not the case. Martin’s X Series was established with that in mind some time ago. And just as the Dreadnought Junior isn’t just for younger hands, the idea of scaling down in price and size for iconic brands should still carry a weight of expectation.

Martin’s reputation means a high standard is expected - not least to welcome players to its world and maybe even keep them loyal for life - even when the materials being used are markedly different to its higher end models.

So while the grain of the back and sides appears to be mahogany, it’s an effect. The X Series has long employed High Pressure Laminate (HPL) for these parts, causing some players to wrinkle their noses. HPL uses highly compressed wood fibres, and in combination with a traditional solid wood top in the building process, Martin claims it results in an instrument that still possesses the famous Martin sound.

HPL also offers a distinct advantage: its durability. It can withstand wear and tear better than many solid woods, and even some layered laminates, while it’s also better at standing up to the temperature/humidity fluctuations caused by everyday conditions and seasonal change that can affect your guitar. You’re more likely to be able to leave this on hand and away from a case and humidifier.

The neck’s Stratabond Rust Birch laminate doesn’t opt for a grain effect and its stripes of multiple birch layers are again something of a Marmite look compared with good ol’ mahogany. It’s said to be stronger than the latter, and the satin feel here is welcoming, but the comparative weight of the neck seems surprisingly heavy for this small shape, although the position of the strap button on the underside of the neck heel means this doesn’t prove a problem on the strap standing up.

The Martin tuners perform well on our test model, but they seem a little large on this otherwise understated 00, perhaps again contributing to the weight; we’d prefer a butterbean design. However, where aesthetic factors could divide, first impressions for the 00LX1AE, in terms of the Martin playing experience, makes a very clear case.

It doesn’t take long to discover that this feels and sounds like a Martin. The action is very low and fast across the synthetic Richlite ’board, aided in the higher reaches by the unintrusive heel.

The playability here even bears well after tuning down half a step. The balance and sparkle we hope for every time we pick up a Martin shines from this guitar.

Anyone expecting a mid-dominant sound will be surprised at what an all-rounder this proves to be. There’s a surprisingly rich bottom-end in play, too, for a small-bodied guitar, and the projection would be enough to woo dreadnought players who want a smaller body.

The 00LX1AE is responsive in a way that all acoustic players will appreciate; it encourages more dynamism in fingerpicking especially, rewarding a lighter touch with its shimmering highs equally as much as its chordal qualities under heavy strumming.

The onboard Fishman Sonitone system reflects some of these organic qualities, but it’s a solid performance compared to the detail and more organic qualities we experienced with the Taylor’s ES-B system on its Academy models.

This guitar throws up an interesting question: beyond the top, how much difference do tonewoods make to an acoustic guitar? Martin is ahead of its competition in making its recipe work to achieve stunning sound - though it’s worth noting its shorter-scaled Dreadnought Junior electro offers solid sapele back and sides at the same price (plus a gigbag that’s not offered here).

This guitar is a reminder not to come to hasty conclusions based on spec alone; you really need to play a guitar to know if it’s going to light your wick - and here’s a little chap we suggest you add to your ‘must-try’ shortlist.