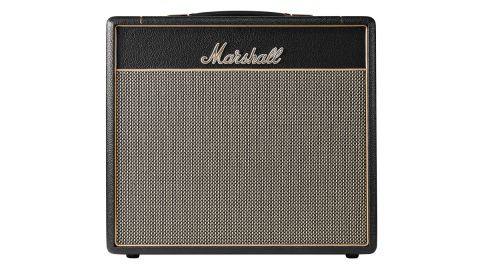 If you’ve always wanted to go over big with Marshall, size is no longer an issue.

In an industry where the word ‘icon’ is frequently overused, there’s no doubt that a Marshall head on top of a pair of 4x12 speaker cabinets is as much a rock guitar icon as the Les Paul or Stratocaster.

These days, however, modern innovations such as quiet stages, in-ear monitoring and, ahem, health and safety have made the stack something to be seen more often than heard. Marshall’s answer to this trend is three slightly more sensible scaled-down versions of its most famous monster stacks. Announced at Winter NAMM 2019, the new Studio range features 20-watt head and 1x10 combo versions of the Super Lead ‘Plexi’ and JCM800 amps, with a relaunch for the Mini Jubilee 20-watt head and 1x12-inch combo, which together cover just about every classic Marshall tone you’re ever likely to need. Here, we’re looking at one of the new combos: the Studio Vintage, inspired respectively by the 1959 Super Lead.

Made in Marshall’s famous Bletchley factory, the combo is powered by a pair of EL34s and styled to look just like the original with tough ply cabinets and period-correct vinyl. The electronics live in a solid steel chassis. Marshall’s typically neat PCB layout features one main board holding all the valve bases, with smaller ones for front- and rear-panel components, linked by ribbon cables terminated with Molex connectors. Smaller-than-usual transformers keep the weight down.

The Studio Vintage combo has top-facing controls on a dark gold plexiglass control panel that - together with other details like the gold piping, small logo and expanded metal mesh vent - authentically evoke the look of an original 1959 Super Lead. It packs a 20-watt power stage using a pair of EL34s and a single 10-inch Celestion V-type loudspeaker, with a comprehensive array of speaker outlets, a fixed-level line out and a simple series effects loop that can be turned off with a small push-button switch. A three-way standby switch offers a choice of either the full 20-watt output or a reduced-power five-watt option. The front panel controls are the same as the original designs: the Studio Vintage has two differently voiced non-footswitchable channels called High Treble and Normal, each with a pair of high- and low-sensitivity input jacks and a volume control, feeding a shared bass, mid and treble EQ with a master presence control.

Sonically, the amp sits in the era you’d associate with it. The Studio Vintage’s Normal channel is fat and warm, while the High Treble channel does exactly what it says on the tin, with a sharp, aggressive high-frequency response. Neither channel is particularly versatile on its own, but the trick with this type of amp is to link both channel inputs with a short patch cable. Used like this, the channel volumes become the primary tone controls and it’s easy to dial in a perfect balance that can be fine-tuned to taste with the regular tone knobs.

While the Super Lead was never a high-gain amp, you can get a respectable crunch with the controls maxed out, and using a guitar with beefy humbuckers helps things along nicely. Overall, the Studio Vintage cops the Super Lead vibe very accurately, with a sparkling treble, fast attack and snappy bass response that ensures every note is heard. It’s also a great platform for pedals, with a simple series loop that can be defeated if it isn’t needed.

Marshall’s early master volume amps cascaded the Super Lead’s two channels in series as a starting point, adding extra distortion controlled by preamp gain and master volume knobs. Following the end of the infamous Rose-Morris distribution deal, the early Master Volume heads got a redesign, resulting in the JCM800 series that dominated world stages throughout the 80s. The JCM800 amps were more aggressive than their direct ancestors, with various modifications that added up to a distinct tone: edgier and with an even faster attack than the Super Lead, not to mention a brutal overdrive that kept note definition all the way up to 11.

We think Marshall’s new Studio combo is an ideal weapon for gigging guitarists who hanker after big-stack tone combined with portability and (slightly) more sensible volume levels. As the amp has a lot of clean headroom when needed, it’s also an ideal partner for pedalboards, while the slightly compressed frequency range of the 10-inch loudspeaker makes them easy to mic up in the studio. Here, the lower five-watt power option makes it easier to wind these amps up to what Billy Gibbons calls “patent pending” levels and get some sizzling hot Marshall tone onto your next single. The line out and effects loop are useful extra features, although it’s a slight annoyance that there’s a defeat button for the loop on the back of the chassis but no remote footswitch option. This aside, the new Studio combo sounds great, is good value for money and is built to handle life on the road. If you’ve always wanted to go over big with Marshall, size is no longer an issue.