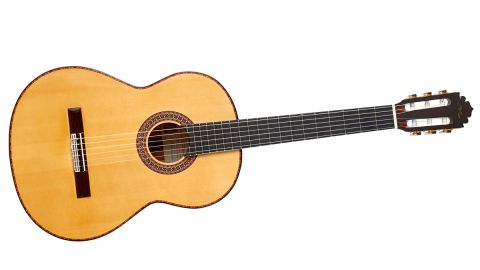 This guitar would do well in the hands of a more advanced player. A superb instrument.

Can the FF withstand the passion of fiery flamenco playing?

Manuel Rodriguez classical guitars are well known in the business.

The company operates in over 120 countries and has been making guitars since 1905. Some of the world’s most prestigious musicians have played them: from soul music pioneer Stevie Wonder to guitarist-composer Jackson Browne and all the way to Mexico’s rock guitarist Sergio Vallin.

In 2000, Manuel Rodriguez expanded its range to include flamenco guitars, cajóns and ukuleles, and the spruce-topped FF that we have here for review is one of the company’s top-end flamenco models.

It has instant appeal for true flamenco aficionados. It doesn’t succumb to the cutaway, an increasingly popular trend in guitars today. There’s also no endpin, or onboard electrics so you won’t be crowd-surfing. If that’s what you want then try the Cutaway FF Boca, another of Manuel Rodriguez’s flamenco models. The guitar on review here is the real deal.

A few years ago we toured the Manuel Rodriguez workshops in Spain. What struck us was the attention to detail and passion for the instruments. Once upon a time it outsourced some of its production to China, but not anymore.

There’s no questioning the validity of this guitar: it is handcrafted, piece-by-piece, at the Manuel Rodriguez workshops in Esquivias, Toledo. The flourish at the top of the headstock seems like a nod to the architectural features of the Alhambra in Granada. This guitar is home-grown and of true Hispanic heritage.

The Flamenco FF is a smart piece of woodcraft. It has a fluid and seamless gloss finish and a transparent golpeador (pick- guard), which we prefer over the coloured alternatives. The soft grain of the German spruce top is one best seen, not hidden. The ebony binding on the German spruce top is decorated with a colourful repeating arrow mosaic-motif, with the rosette sharing the same palette (and pattern) of colours. The greens and reds make you feel somewhat festive but no less authentically flamenco.

The back has a dark strip of Indian rosewood down the centre, which bottlenecks towards the Spanish heel. The dark richness of this wood contrasts well with the yellow solid cypress surrounding it. The same Indian rosewood can be seen in the sound-hole, unfinished and decidedly lighter in tone (showing how the finishing gloss affects the colour of the wood).

Tuning the guitar is made easy with the gold-plated machine heads, which adorn the Indian rosewood headstock. The Manuel Rodriguez logo is subtly inlaid with abalone shell - a small, reflective signature reminding you that you are in capable hands. This feature has however been retracted on future FF models and replaced with gold effect owing to small problems with production.

To play, the guitar feels taut, like a loaded spring. The sound it produces is sharp and crisp. Not your normal sharp and crisp though. There’s a fruitiness and liveliness to it, which is amplified the higher up the guitar you play. It has the perfect percussive playground.

The lower range strings have a hefty kick too (though this could be augmented by the newness of the strings). The sound is so fresh when playing by the bridge it feels like you’ve been hit by an arctic breeze. Thank goodness for the bass counterpart. It would be good to see how this guitar’s sound develops - we imagine the cypress might mellow to give a slightly warmer sound, but only time will tell.

We always test guitars for their consistency of sound and, while the upper and lower registers are equally impressive, the guitar does seem to have a mid-range that gets a little lost, mainly around the G string - though this could be owing more to a dud string than anything else.

The guitar has a boastful sustain, something flamenco players may not be used to. We could hear and feel an E chord 21 seconds after strumming it. Very impressive you might think, but the right hand has some work to do to keep that in check, especially when attacking faster melodic lines. While harmonics are not necessarily something to make note of in flamenco guitars, they are here in the Manuel Rodriguez FF. Though not the purest, they could give your performance that something extra.

Along with the sustain, this guitar has some immense projection. At maximum volume, and with our somewhat strained vocals (far from the skills of the traditional cantaor) belting out some wobbly tunes, this guitar overwhelmed the mix. It would certainly do well on stage in the smaller venue or outside accompanying baile (flamenco dance) and palmas (handclapping). We had to take it down a notch, thereby pleasing the neighbours.

The neck, made from Honduras cedar and reinforced with a strip of ebony on the reverse, has a smooth, ebony fingerboard, which allows for swift transitions up and down the guitar. The left hand feels snug with easy reaching capabilities. The right hand  has a good, pliable hold of the strings and the right arm feels comfortable sitting on the top. Combined with the relatively low action (an absolute must for flamenco players, and without which you won’t get that flamenco buzz) it makes it all the more easy to get your melodic scales in motion.

It takes a lot of control to wield the power this flamenco model has - and we’d love to see it in the hands of someone like Juan Martín or Paco Peña. With the cypress back and sides giving the guitar that harder edge, the thin spruce top making it incredibly responsive and the guitar being extremely light, you just feel like a professional playing it.

If we were to compare this guitar to others we have recently reviewed, it has a similar striking design to the Admira F4 but with the playability of the Camps M-5-S. The Manuel Rodriguez FF then takes it up a notch. As a result it stands in a different category, not just because of the price (at £1349 it comes out at the more expensive end of the budget), but because of the overall craftsmanship and sound.

This instrument is probably more for true advocates of flamenco music rather than those wishing to dip their toes in Andalusian waters. It’s the next step up from the mid-range instruments and for guitarists wanting to get their teeth into the wide-ranging rhythms of the cante jondo, the cante chico, the cante intermedio or even the intricacies of the traditional fandango.

This is the instrument that can take you there. There’s no case to accompany the guitar so it’s worth forking out a bit more to get something to protect it. The Manuel Rodriguez website stocks solid cases - we would certainly recommend investing in one - you wouldn’t want this guitar to be ferried about in a soft case and risk damage.