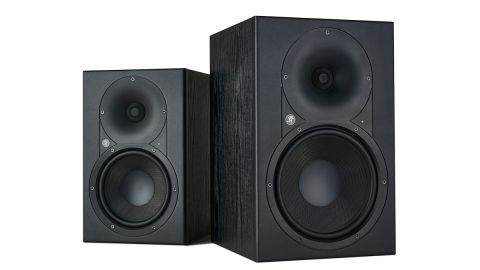 The XRs successfully fill a gap in the Mackie monitor range, combining solid construction with an affordable price tag.

Mackie’s HR Series professional monitors have over 20 years on the clock and many fans, but at over a grand a pair for the six-inch HR624 Mk2, they’re not cheap.

The new XR series shaves roughly a third off that price tag and delivers a new rear-ported design with class D amplification (bear in mind the HRs use a passive radiator panel and class AB amps).

The XR824 quotes a better low frequency response to 36Hz, (the XR624 is 45Hz) and at almost 10cm taller and over 15kg, the HR824s are also considerably larger and heavier. To compensate for the larger LF driver, the XR824 crossover is slightly lower at 2.2kHz rather than 2.7kHz for the XR624. Rounding things off, both designs include optional auto power off after 15 minutes of idle time, and both thermal and overload protection.

As we’ve come to expect from Mackie, the XRs are solidly put together, and with their logarithmic tweeter waveguide and wood effect finish, they’re visually reminiscent of Mackie’s original HR design. Both monitors include basic foam isolation pads and stick-on rubber feet.

We’re not particularly fond of super-bright monitors, but in both cases we went for the +2dB HF EQ setting, and although the flat option was also workable, to my ears the -2dB setting is simply too dark.

Both pairs sound reasonably forward in the midrange, which is great for detailed mixing work and balancing key lead elements, and both deliver good stereo imaging with a broad listening sweet spot.

It’s the key midrange frequencies where the two models sound most different - the XR824 sounding a little disjointed, and switching over to the XR624s only hammers this point home. Despite its less impressive bass extension, the XR624 is particularly revealing for guitar-heavy tracks, and this can be a tough test for even the best monitors.

Overall, we’d be happy working on either of the XRs, and although the XR824 is a bit more vibey, for us the more compact and focused XR624 is the better sounding model.