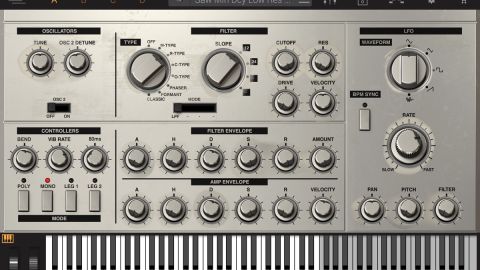 Essentially a massive, expensive synth ROMpler, Syntronik makes enough improvements to the formula to stand out from the crowd, and sounds fantastic.

Powered by the same engine as its SampleTank 3 ROMpler, Syntronik (VST/AU/AAX/standalone) is an epic-scale compilation of over 2000 preset sounds built on samples of 38 classic synths and divided up into 17 instrument categories.

Ten of the instruments group multiple synths - Pro-V, based on the two Prophets, for example, and String Box, taking in the Solina String Ensemble, Elka Rhapsody 490, Hohner String Performer and a couple of Rolands - while the other seven are dedicated  to just one each, such as T-03 covering the TB-303, and Harpy 260, which we’ll leave you to figure out.

The presets are housed in an intuitive tagged browser and cover all the usual bases - leads, pads, strings, er… basses, percussion, FX, plucks, keys and so on - and with the ROMs including multiple round robins and oscillator combinations, the whole soundbank weighs in at an impressive 58GB. Up to four presets can be layered in an admirably straightforward editor for stacks and splits (by note and velocity), but mixing is done in a single contextual panel rather than a unified mixer page.

This is an algorithmic system that emulates the inherent irregularity of analogue oscillators by fluctuating the tuning, phase and ‘color’ of the multisamples. IK claim that DRIFT goes deeper than other, similar approaches, and while we can’t vouch for the under-the-hood specifics, obviously, we can report that the note-to-note character of Syntronik’s virtual synths does indeed sound charmingly organic and very subtly variable - the effect is particularly evident when both of the two oscillators are active.

There are three ways to get involved with Syntronik, and choosing between them will come down to your budget, how immediately sold you are on the whole concept, and whether or not you’re already using SampleTank 3.

The first way is to buy the full Syntronik for £300. The second is to install Syntronik Free, giving you a flavour of the full package with 50 presets utilising all 17 instruments, then add full individual instruments for £50 each via the in-app store.

Alternatively, if you have SampleTank 3 installed, you can buy Syntronik’s instruments in the ST3 store, integrating them with your SampleTank library as well as Syntronik itself. Should you opt to buy the whole thing outright, be warned that a hellish installation procedure awaits.

Rather than distribute the sound library as a single multi-part download, IK have chosen to break it down into individual instrument installers, some of them multi-part, forcing you to nurse your way through 23 downloads, then install each one individually. We appreciate being able to pick and choose in order to save disk space, but not having the option to simply get all the instruments in a single installer, then check off the ones you want, is ridiculous.

Also central to Syntronik’s sonic promise is the filter block, which houses circuit-modelled emulations of the Moog ladder, Oberheim state variable, Curtis CEM3320 and Roland IR3109 resonant filters. The Moog and Oberheim models feature high-pass, band-pass, low-pass and notch types (12dB/octave for the Oberheim, various slopes for the Moog), while the other two are 12/24dB low-pass only.

Sounding phenomenal and supremely responsive, they’re without doubt among the best software filters we’ve ever heard. And with all four - as well as a 1/2/4/8-stage phaser, a formant filter and the ‘classic’ SampleTank filter - available to every instrument, you can shove, say, a multisampled Moog Taurus oscillator through a modelled Roland filter, or bolt the Oberheim SVF onto the Alesis Andromeda. Awesome stuff.

Of course, Syntronik’s 17 instruments aren’t full emulations of the original synths they represent. Every one of them has its own singular visual identity, but the actual interface comprises the same array of controls across the board, be they presented as knobs or sliders. The control set starts with tuning of the main oscillator, and activation and detuning of a second oscillator by up to 50 cents up or down.

The Filter section houses the filter model selection switches, along with knobs/sliders for cutoff, resonance, overdrive and velocity response. Modulation is provided by AHDSR envelopes for the amp and filter, and an LFO for wobbling of pitch, pan and/or cutoff; and the Controllers section gives access to pitchbend range, mod wheel vibrato rate, play mode (Mono, Poly or Legato) and legato glide time. Unavoidably (given their sample-based nature) inflexible oscillators aside, the homogenous interface enables enough programmability to get the job done. Beyond that, though, the sound can be utterly transformed using Syntronik’s 38 gorgeous ‘lunchbox’-style effects. Lifted from SampleTank (and thus originally T-RackS and Amplitube), you can load up to five of them at once into every layer. From EQ, dynamics and distortion to delay, reverb, filtering and modulation, it’s an all-encompassing roster, and every device sounds as good as it looks.

If we were to judge Syntronik solely on its synthesis controls, we’d have to describe it as no better or worse than countless other classic synth ROMplers on the market.

What elevates it above the baseline, though, is the quality of the multisampling, the sheer number of presets on offer, DRIFT, that incredible filter, those spectacular effects, and the ability to layer four patches at a time. All these elements add up to make Syntronik a quick, easy and convincingly analogue-sounding synthesiser compendium that delivers a voluminous and versatile library of highly customisable preset sounds.