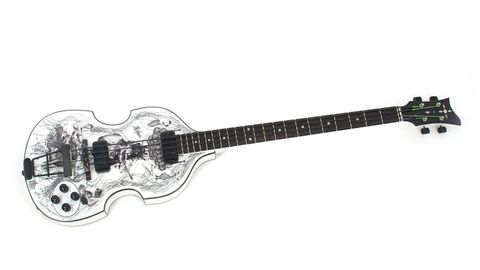 A very impressive package for the Hofner devotee.

Not only have Hofner celebrated its 60th anniversary in the past 12 months, the Beatles’ album Revolver also reached its half century - so it comes as no surprise that this bass features artwork from that album, designed by Klaus Voormann, who created the original album cover.

This run of instruments has been limited to 60 pieces, of which our review model is number 30: the package includes a certificate of authenticity, a limited edition art print, a coffee cup, a pen and box, a Hofner strap, a Hofner fuzz pedal, a CD, a set of ‘Teacup’ control knobs and a Hofner bullet case. The package is impressive - but how good is the actual instrument?

Handmade in Germany, the bass features the original 1956 headstock - not seen on reissue instruments in all that time - and an original oval control panel.

Holding the bass for the first time, you get the impression that it is a delicate instrument and that some care should be taken with it. The violin body design retains all of its visual impact, but the stark white body, black binding and impressive artwork is quite a departure from what we’re used to seeing on a Hofner bass.

With no contouring at all, the slab-like physical attributes aren’t the most comfortable to get used to, although the lightweight nature of the instrument and balance make up for it.

The ebony bridge and tailpiece look rather delicate - although we’ve no doubt that they do an admirable job, otherwise why would Hofner stuck with the design?

Fitted with Hofner black tapewound strings, the bass will no doubt have a vintage tone, very much in keeping with the instrument’s history and most notable user. The control setup is tightly spaced, with two volume and two tone controls on a white control plate, and in keeping with the overall look, the Hofner staple nickel pickups are also finished in black.

The set neck is resplendent in its gloss white finish, the dark rosewood fingerboard fulfilling the ‘black and white’ theme nicely. The rounded C-shaped neck profile gives the bass some needed bulk, and the short 30” scale means the bass is ideally suited to players with small hands or short fingers. The setup is very professional and as you would expect, the level of finishing on such a limited instrument is exceptional. Needless to say, there were no obvious sharp fret ends.

Hofner basses have always had a sound of their own, and this bass is no different. The construction, scale length and choice of strings all contribute to a hollow, almost muted acoustic tone, not unlike a rubber-stringed instrument such as an Ashbory.

Plug in and the identifiable Hofner tones leap out at you, without too much variation. Using the volume controls, soloing each pickup reveals some tonal differentiation, but not a huge amount. The neck pickup is as rounded and full-bodied as you would expect, but the bridge pickup really doesn’t offer too much in the twang department, just a slightly less bass-heavy response.

The tone controls do offer some tonal colour, but if you’re looking for biting definition or a tone to project your playing, this is not the bass for you - but let’s be honest about this whole package.

It’s aimed at the Hofner aficionado and Beatles fans, rather than the general bassist who may need an array of tones and the sort of bass performance that the Hofner simply isn’t designed to provide. It’s unlikely that you would use such an instrument as a working bass, and rightly so, although it should certainly be admired and played casually for enjoyment. After all, who knows what this package could be worth in years to come.

So taking our kid gloves off, what can we deduce from this? It’s a highly desirable package if you’re into this sort of thing, but the question is, will you be buying it to play, or to own in the hope it might be worth considerably more in decades to come? £6000 can buy a lot of bass, or basses, after all. It’s unique, quirky and a little odd, but a pleasure to play all the same.