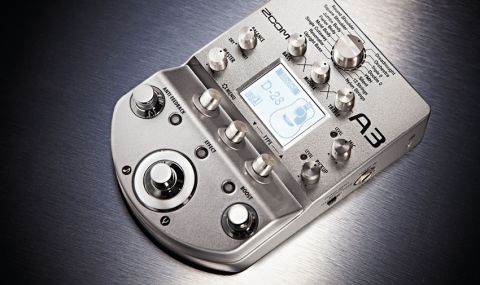 A missed opportunity to create a preamp/multi-effects for the acoustic player. The sounds and features are there, but good luck trying to get them to your audience.

The A3 marks the latest in Zoom's series of acoustic multi-effects, and the company certainly has high hopes for this silver stompbox.

It not only aims to be an acoustic preamp, multi-effects pedal and DI box, but the effects specialists at Zoom claim it can change the sound of your acoustic's body shape, recreate 28 classic guitars and reduce feedback. And all that's crammed into a unit that fits inside your guitar case. Surely, it must be too good to be true?

On the surface, the A3 is a tidy-looking, weighty metal-cased unit. The main connectors are on its sides, and you get a three-way Pickup Select selector switch for flat, magnetic or piezo pickup types. On the top edge, there is a combi XLR/jack mic input, XLR balanced output with ground lift switch, DC input for the supplied mains adaptor, and power on/off, which also has an eco mode - this turns the unit off after 10 hours of non-use.

So far, so good. Surrounding the small but clear LCD are all our controls. At the top is a 16-position rotary switch, which selects your body type: round shoulder, square shoulder and so on. By selecting the body type and the (programmable) model type, Zoom says that "you can share the original rich and beautiful tone of your acoustic guitar with audiences when you perform live".

Beneath this large control are three rotaries for bass, mid and treble EQ, and below those are rotaries for dry/wet balance, master volume plus mic and pickup level rotaries, each with level-indicating LEDs.

If that's not enough, there are three more controls directly under the LCD: menu, type up and type down, which are each combined rotary and push- switches. Then there are three footswitches - anti-feedback, effect and boost - and their respective red LEDs, which are also push-switches. Initially, at least, the A3 is up there among the most complicated and unintuitive stompboxes we've ever encountered.

Each of your patches is made up of three sounds. The Effect 1 slot is for selecting one of 28 models only. The remaining two effects slots can have any of the 40 onboard effects loaded in that range, from compression, modulation, delay and reverb. Those three push/ turn knobs under the LCD access various parameters and, of course, the selections for each of the two effects slots.

First, we plug in and select the required pickup type we're after. But what we hear are subtle changes - the model types have more of an effect, and there's no reason why you can't use a completely different model type to the guitar you're actually playing. If you have a dual-pickup/mic system, you can use both mic and guitar inputs, and place the mic anywhere in the signal path after Effect 1. You can also alter the phase and apply a low-cut (from a choice of three frequencies) to the mic.

The three-band EQ, however, is shared by both inputs. The EQ itself works fine, although the knobs are small, with black micro-dot indicators, and hard to grip, and the 'silver on silver' of the pots and unit means that setting things up on a dimly lit stage isn't easy.

That said, the effects themselves sound really good. There are rich reverbs, good modulations and lots of delays; the multi-tap delay is almost worth the money alone. The three-stage anti-feedback filter works well, as does the boost, and both have various parameters to set (cue more button pushing). There's also a tap tempo, but you can't get that and the onboard tuner - it's an either/or selection.

Eventually, we manage to get some of those good sounds into a patch, name it, and save it into one of the 20 slots. To recall those patches, however, you have to enter the Memory menu. If you want to switch between them in performance, you have to assign them to patches in order and step through them. It has to be said again: it's not the most intuitive product we've ever tested.

As a preamp/DI pedal with a choice of two effects, the A3 works very well and has a good feature set, although you should be prepared for plenty of button mashing. But as a multi-effects for the acoustic performer, it's rather compromised. If you want more than one patch per song, it's possible but not easy to achieve. It's a shame that you can't recall your sounds in a more conventional fashion - an additional footswitch with up/down patch select buttons would certainly make things much easier live.

Overall, we can't help feeling that, while there's an awful lot of good stuff inside the A3, it's all just a bit too difficult to get to.