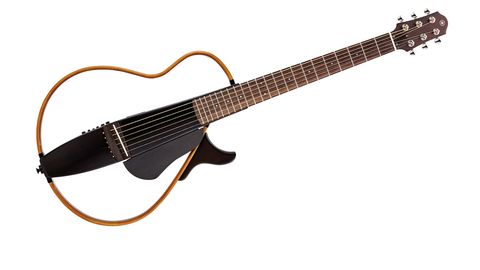 The ultimate practice tool? The new Silent Guitar is better than ever.

It's a home truth that we all need to practise to get better. So check this out - an electro-acoustic guitar that barely has any acoustic volume, so you won't disturb anyone with your ham-fisted strumming or picking.

Put a set of headphones on and you'll hear your playing with a studio-quality acoustic sound and posh effects. Oh, and you can plug in your mp3 player, too. You might never leave the couch...

What's more, plug this so-called Silent Guitar into a PA or acoustic amp and you have a highly realistic electro-acoustic sound without any feedback. How?

Well, Yamaha has been hard at work. Although the Silent Guitar - part of a range of Silent practice instruments that Yamaha offers - originally surfaced in 2003, it's been upgraded for 2015.

The concept is the same: a solid mahogany centre-block like you'll get in the middle of an ES-335 and, to form the outline of the cutaway body, we have a maple laminate frame.

The treble side is permanently fixed, but the bass side slots in and out so you can pack it up into the supplied gigbag, which looks more like you're carrying a high-powered rifle than an electro-acoustic guitar. Not quite a 'travel guitar', but certainly easier if you're on the bus.

The neck is quite normal: a mainstream-feeling handful that typically is beautiful fretting and plays really well - like any other Yamaha acoustic, really. But the real secret lies in the electronics crammed into that centre block.

Under the compensated saddle of the pin bridge is an SRT (Studio Response Technology) piezo pickup. On its own, it gives a pretty good modern piezo-acoustic-like sound, but turn up the SRT blend control, and it overlays a digital SRT 'sample', like convolution processing, which simulates the sound of a real acoustic guitar recorded in a posh studio with a high-end microphone - it's actually a Yamaha LS26 mic'd with a Royer R-122 and recorded in East-West Studios, LA.

To add some ambience, there are two reverbs and a decent rock-ready chorus, plus we have treble and bass EQ if you want to tweak things. The onboard tuner mutes the output, too.

So, when you've done your practice, you can head for the stage, and not only does the SLG200S look cool/daft depending on your style, it sounds remarkably good into a decent PA or acoustic amp: expect to see jaws drop, because your audience won't believe what they're hearing from such an infeasible-looking instrument.

And just smile when your mates are having feedback problems with their antiquated electros. The future's here... and it's Silent.