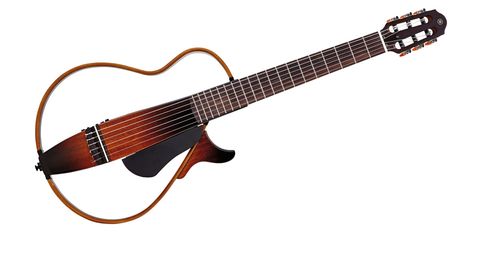 If you've caught the nylon bug, this is the place to start. A lot of guitar for the money.

Yamaha's Silent electro 'acoustic' guitars - both the steel- and nylon-string models - have been featured in our pages before. And not just as practice instruments, either.

Thanks to a solid body - and no acoustic chamber - they are entirely feedback resistant: one reason why more than one big-name guitarist has used one for an amplified acoustic interlude in a loud rock band setting.

A major feature of the Silent Guitar design is its highly modernist appearance: aside from the neck and centre section, a laminated guitar-shaped frame is all you get for the 'body'.

The bass-side frame can be removed and the whole thing packed up into a supplied gigbag, which looks more like a slim carry bag for a rifle rather than an acoustic guitar. It's not a travel guitar, per se, but packed up it's a lot more compact than a traditional acoustic.

For 2015, the upgraded SLG200S and SLG200N (nylon-string, reviewed here) will replace the existing range, which consists of three models: the 634mm steel-string SLG110S and two nylon-string models, the more classical-styled SLG130NW with 650mm scale, wide neck and ebony fingerboard, and the SLG110N with the same scale and a rosewood fingerboard.

The same steel/nylon scale lengths are retained in this year's range, so the primary difference between the two is the wider nut and flat fingerboard of the nylon string model, its classic-style slotted headstock, and the strings, of course.

So, what's new? Firstly, the actual shape has been altered - for the better - with a slightly rounder bass-side shoulder and a less pointed wooden horn on the treble side frame that flows into the central frame in a simpler, classier curve.

The central body-block is now mahogany, instead of maple, which is gloss-finished in either Natural, Brown Sunburst or Slack along with the solid treble horn. The previous 110s used a plastic frame; the more expensive 130 used wood, as with our new model.

The outer facing of the laminate frame is still rosewood but the lighter maple inner laminates have been stained a darker brown - all in all, the 2015 model looks more like an orchestral instrument.

There's a glued-in mahogany necks (with adjustable truss rod) with a very thin, slightly open-pored matt finish. The nylon measures 50.2mm at the nut, and 59.7mm at the 12th-fret body join. Depth-wise, its similar to the previously reviewed steel model at the 1st fret but shallower in the higher positions - around 21.8mm at the 9th fret.

As a consequence the profile has a broader, flatter-backed C shape, not as flat or U'd as many classicals but very different to the steel. It also uses a rosewood bridge: the nylon has a broader string spacing and strings attach in classical-style.

Frets are medium gauge, but the 12-fret join and longer scale of the nylon means we have fewer frets and the bridge sits lower on the body. There's also a rigid, black plastic pickguard or finger rest, too.

The electronics module screws to the underside of the central body. Whereas the previous SLGs have a fairly conventional under-saddle piezo with preamp and effects, the 2015 models add Yamaha's Studio Response Technology (SRT): a digital system that emulates the sound of a real guitar, studio-recorded with a high-class microphone.

While other Yamaha SRT-equipped electros offer different 'mic' options, here we just get one that is blended over the SRT (piezo under-saddle) pickup.

Along with an onboard tuner (another new addition), we get treble and bass EQ, three digital effects (one less than the prior models), plus an aux input for an mp3 player with its own level control so you can play along with practice pieces or backing tracks, and monitor either on headphones (earbuds are included) or PA/acoustic amp via the standard jack output.

The SLG200N is lightweight, about the equivalent of a lightly built steel-string, for example, and although strapped on there's a slight neck pull, it's easy to adjust to. Played seated it's more comfortable, like a thinline electro or electric, really.

By design, acoustic volume is slight albeit enough to practise in a quiet room. But plug in a set of headphones and the experience is considerably expanded. Obviously, the quality of the 'phones will dictate what you hear, but with a pair of Sennheiser HD 380 Pro over-ear monitoring 'phones, what we hear is exceptional.

Amp'd though a Line 6 StageSource, and stage pedalboard with LR Baggs' Venue DI, we compare the nylon-string to a well-gigged Yamaha NTX900FM. The SLG200N doesn't sound worse by any means. With the SRT 'mic' voiced fully, it's a well balanced sound, a shade more treble giving it the matching 'bite' of the acoustic nylon-string. It sounds more even, too, and again that sustain tail is noticeable.

As a practice tool, this is a superb and a noticeable upgrade to the existing Silent Guitars, thanks to that realistic-sounding SRT technology. With headphones on, not only are your practice sessions very private, but with quality sounds such as these, you're inspired to play.

For DI recording, too, the sounds are certainly more accurate than under-saddle or even soundboard transducer-based systems. Unlike other SRT-equipped Yamahas, or a Fishman Aura-equipped instrument, you just have one 'voice', but that's certainly enough to sketch ideas to a high standard.

Live, through decent gear, you really shouldn't have a problem either: it produces very credible tones that belie both the price of the guitar not to mention its appearance.

The subtly longer sustain can certainly work in your favour and the total absence of feedback means not only can you play at much higher levels if you have to, but you can easily engage lots of outboard effects and really blur the gap between the electric and amplified acoustic guitar.

So, should every practising, performing, songwriting guitarist have one? As surprising as it may seem, the simple answer is, yes.