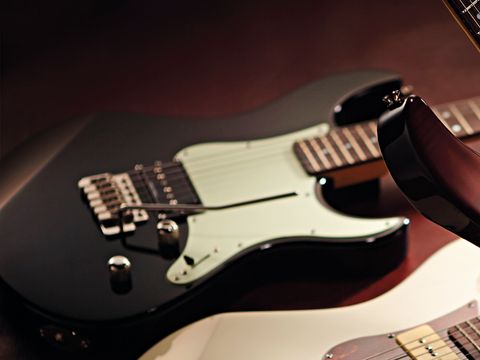 If your heart tends to beat to the sound of guilty pleasures such as Poison, Warrant, Van Halen et al, check this out.

This new model is the result of more than a year's worth of planning, refining and testing, and is based on two Custom Shop prototypes.

Driving the concept of revisiting the range of mid-priced Pacificas were Yamaha's Mark Kirkland and Julian Ward, and the latter takes up the story.

The model has a solid alder body that's the same dimensions as the bread-and-butter Pacifica 112, and the general spec also includes Grover locking tuners and Graph Tech Black Tusq nuts.

"We really wanted to make a single-pickup Pacifica," states Ward. "When we started to think about why we were so drawn to this idea, all we could come up with was that single-pickup guitars were cool!"

He's right, of course, and the 510 is the Pacifica's first single-pickup design. However, there's more to it than that, as the pickup in question is a new version of the Seymour Duncan P-Rails - which has impressed us in previous encounters - providing both humbucking, single-coil and P-90 tones in an individual package.

"The only problem [with the P-Rails] was that we needed a wider spacing to go with the Wilkinson vibrato we'd selected, and that wasn't available from Seymour Duncan. So we worked with them to develop a Trembucker version and, as a result, have exclusivity on the Trembucker-spaced P-Rails for OEM use."

The three pickup modes are selected via a standard three-way lever switch and the expanse of barren scratchplate feels almost like it's mocking the absence of a neck pickup, to prove a point. The choice of three-ply vintage mint green makes it so much easier on the eye than stark white.

One thing for which 'boutique' guitars are renowned is their playability. The 510's maple neck feels a little fat, but is in no way clubby. It's finished using a gloss top coat over a vintage tint; Yamaha aimed specifically for a more modified vintage feel.

It's certainly comfortable to play, but perhaps a bare or lightly satin-finished neck would have suited the 'custom tweaks' ethos more effectively.

The vibrato tends to stick on occasion; it's easy to sort out with a tweak, or you might prefer to set it up for downward movement only, a la Mr Van Halen. Whatever, this is a very enjoyable rocker to play.

The P-Rails provides a wide array of tones and the humbucker, while too hot to be classified as 'vintage' in character, gives out plenty of grunt for full-sized rock chords.

Forgive us, but as men of a certain age, the temptation to go all out on '80s-style riffs is just too great. We soon found ourselves bashing out Mötley Crüe's Looks That Kill and plenty more besides - this guitar positively begs for that kind of playing as you grin like the naughty teenager who lurks (not so) deep within.

Growing up again, the P-90 tone is not as fat as the genuine article, but it's more than usable in rock and bluesy settings, where you can use the volume and tone pots to eke out a wider variety of voices.

Yamaha's Pacificas have always ticked the value box, but this guitar adds an air of something more unique and desirable in its LA hot-rod vibe: a good idea, well executed. Give it a go and see if there's a budget boutique choice here for you.