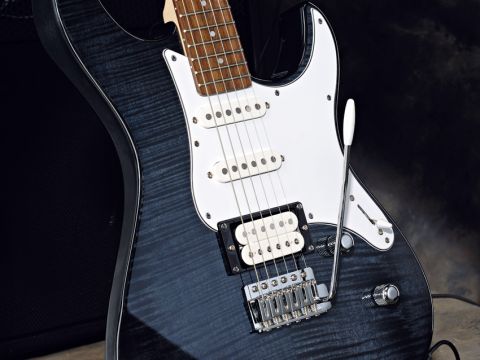 This is no perfect guitar by any stretch of the imagination, but taken in the context of its price and target audience the VFM comes out as a winner.

The bloodiest turf wars are not fought at the top end of the guitar market, but in the gutter, as a thousand luthiers slug it out for a market share with entry-level electrics that get cheaper and better every year.

It wasn't always this way. Back in 1993, Yamaha's Pacifica range was among the first to address the needs of the common man, but far from resting on its laurels, the company is flexing its muscles with the new 212 VFM: a model that's touted as "the next step up" with the addition of a maple top. At £329, is this an offer you can't refuse?

Redesigning the Pacifica from the ground up would be pricey, so the VFM is built on the same old foundations, for good and bad. The doublecut body is still boring to look at, but gives the same great access as a Strat.

The whammy bar still needs a serious yank to get any significant wobble. The maple neck is as comfortable as ever, albeit with a radius that means playing complicated riffs on the low strings can be a bit of a stretch for players with small hands.

The Alnico-V pickup layout is the same as the 'normal' Pacifica 212 (and that's only £240). In other words, the VFM's only structural difference to its older brother is that flamed maple top.

It's relatively unusual to see this feature on a doublecut 'S-style' model, and although it's certainly less significant than, say, a Les Paul's chunky maple cap, it's attractive enough and should flavour the tone.

When it comes down to tone, the VFM is a guitar of two halves. Clean, we find the singlecoils far superior to the woolly humbucker, particularly when you run the neck and middle in combination, unlocking a classic 'Hendrix' quack.

Hit the filth, though, and we much prefer the bite of the beast that resides in the bridge, which has body and edge, unlike the distorted singlecoils, which sometimes feel a little shrill and weedy. There's also the option of splitting the humbucker, but we don't like that tone so much.

And the effect of the maple top? It's subtle, but the tonal flavour is definitely in there, bringing brightness to your riffs and giving this model an edge over all the identikit basswood slabs out there.

Time will tell if Yamaha has overstretched itself by pushing the Pacifica range towards the mid-price market, but this souped-up version represents a better return than the standard 212, with the maple top bringing a character well worth 100 sheets.

Physically and tonally, it's not quite perfect, but taken in context, it's punchy, versatile and certainly good enough to put it near the top of any young gunslinger's wish-list (especially with street price closer to £280).

So, Yamaha may no longer have a stranglehold on the entry-level market, but you'll have to prise this Pacifica out of our cold, dead fingers.