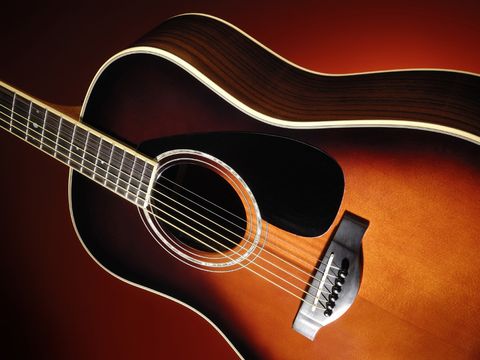 The LLX6A combines Yamaha's detailed build with rich and expressive tones and a boutique-like old school vibe: a serious contender.

Unlike cutaways, there's not as large a selection of non-cutaway electros and, attracted to the style, we wondered if we could get a high quality guitar of this type without going into four figures. Yamaha has just such a contender: the LLX6A.

The LLX6A marks the entry-point into Yamaha's prestigious LLX electro range. Models LLX26 and LLX36 represent the top-end of the series, with the LLX36 coming in at a whopping £3,779.

But this is no low-end, entry level guitar - on first impression the LLX6A certainly had us admiring its seemingly flawless Chinese construction and expensive aesthetics. It's easy to see why - Yamaha's Chinese facilities share similar construction methods to the revered Japanese Music Craft facility, but make use of reduced labour costs, less costly materials and faster building techniques.

The curvaceous dreadnought (which Yamaha refers to as a 'jumbo') marries an Engelmann spruce top with laminate rosewood back and sides, edged with a vintage-looking cream binding that also appears along the dark ebony fretboard, headstock and heel.

Yamaha has tweaked the LLX6A's shape; giving a slimmer waist and shorter, rounder shoulders than seen on a traditional dread, ditto the lower bout. As a result the LLX6A, not least in its sunburst finish, offers a very 'in vogue' vintage Gibson vibe.

Indeed the smooth gloss tobacco brown sunburst exudes boutique quality, but if it's not to your taste, the guitar is available in three other finishes. Other visual treats include an immaculately presented abalone soundhole rosette, abalone three-dot 12th fret marker and gold-plated enclosed tuners.

A traditional width neck with a smooth satin finish feels very manageable, with a round 'C' profile. And while the string spacing is relatively narrow, in typical Yamaha style, after a few minutes we settled right into a finger-picking groove.

The guitar is stage-ready too, fitted with Yamaha's ART System 57CB, which equates to a three-way pickup system that comprises two side-by-side contact pickups under the saddle, with two additional circular transducer 'sub' pickups placed under bass and treble ends of the ebony bridge.

The main pickups are controlled via the master volume on the rim-mounted preamp, while the two 'sub' pickups have separate bass and treble volume controls. On top of this we also have a three-band EQ and an on-board chromatic tuner, which although accurate and easy to read, doesn't mute the output signal when engaged.

Despite its diminutive dreadnought style, the LLX6A projects much more than we expected. The bottom end is smooth and rich, having a soft appeal when attacked with the fingers. The mids are strident while the tight top end adds just enough sparkle and definition for that sweet yet precise Yamaha tone.

On plugging in, we find our most natural and transparent electro tone with the EQ set flat and the 'sub' pickup controls just a touch over halfway. Here the sound is mellow without being too soft or lacking in projection - a naturally uncluttered and sweet amplified tone.

The mid EQ slider is broad in its range - a slight boost really pronounces the mids while the bass EQ conjures a pleasant soft sweep that doesn't become overly boomy, but will quickly become woolly if overdone. The treble slider is also very active and, with too keen a hand, can verge on becoming rather glassy: less is definitely more.

The 'sub' volumes act almost as light and dark controls. Adjusting the bass clockwise darkens up the sound adding, for example, extra warmth when running direct into a PA. The treble adds a brighter edge to proceedings - or a great deal of presence if desired - which works particularly well when in a band mix where the LLX6A can really cut through.

Non-cutaway electro dreadnoughts are rather thin on the ground at this price point, so the LLX6A not only represents the best of what Yamaha can bring to the market, but is also a testament to what a well-managed and well-equipped Chinese manufacturer can produce.

The only issues we experienced were with the preamp: engaging the tuner doesn't mute the output signal and there are no feedback control facilities, which some might see as essential for live work. Even so, the LLX6A marries rich tones and a boutique, old-school Gibson-ish vibe all at a very reasonable price. Definitely a class act.