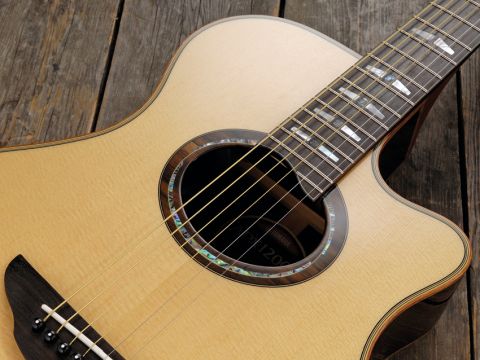 A comfortable, powerful electro equally at home on stage or in the studio.

First impressions of the APX are great, across the board. It feels lightweight and comfortable with an excellent out-of-the-box set-up; electric players will adapt easily.

The solid Sitka spruce soundboard is a fine selection featuring a straight, consistent grain, though it doesn't appear to be bookmatched. The solid rosewood back and sides are bound with mahogany and, in the case of the soundboard, finished with three-ply black and white coachlining.

"Plugged in, the APX leaps into life with a punchy, bright 'snap'."

Mahogany has also been used alongside abalone for the soundhole rosette - and very well-finished it is too.

This APX feels well constructed and finished and, although comparatively thin, the guitar's high-gloss finish is well executed.

Yamaha's stated purpose for the APX1200II is for plugged-in performance, be it onstage or in the studio. With that in mind, we'd be forgiven for focusing on its electro capabilities, but that would be missing a trick: this is still a good acoustic guitar.

While the APX's lack of body mass does have an effect on its ability to offer a thick, rounded bass, it does project a strong mid-range and the high end is sparklingly clear and bright. Volume and sustain levels are comparatively good bearing in mind the guitar's size - the APX offers an instantly likable and usable acoustic tone.

Plugged in, it leaps into life with a punchy, bright 'snap'. Rolling off the signal from the pickup in favour of the mic models took the slightly metallic-sounding edge off the tone, and further rolling the mids off we were able to warm things up considerably.

The guitar definitely handles dynamics and variations in right-hand techniques with far more precision when plugged in than it does in acoustic mode.

Despite our best efforts at encouragement and plenty of opportunity, the APX resisted feedback - even at full volume - making the supplied rubber feedback-busting soundhole insert redundant. Overall, an impressive performance.