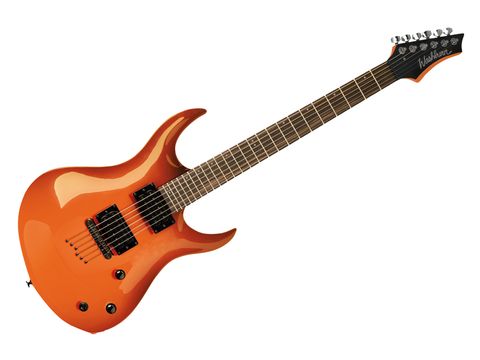 For a guitar whose playability is matched by its practicality, price and very nearly by its voice, this is a real peach.

It wasn't so long ago that a guitar equipped with a go-faster set neck, Seymour Duncan-designed pickups and a solid mahogany body was something you'd work all summer for, washing cars and cutting lawns.

But these days, just rummage down the back of the sofa and you'll be on your way to convincing Washburn to part with one. The Chicago company's latest act of philanthropy is its XM series.

"With the gain cranked up, the bridge pickup is all responsive tight crunch, with a vibrant tonal response that's just the ticket for squealing harmonics."

Straight out of the case, the XM-DLX2 (pronounced deluxe, surely) is like an asymmetric throwback to Ibanez's ergonomic Sabre series, with a solid mahogany body carved judiciously to preserve the player's spine. There is no Floyd Rose floating vibrato to have today's yoof-gone-Wylde spending pocket money on Allen wrenches.

There's an appreciation of minimalism and pragmatism that runs through the guitar's unfussy design: twin humbuckers, a three-way selector switch, string-through body with a tune-o-matic style bridge. The electric guitar doesn't get much simpler than this.

The XM-DLX2 delivers instant gratification as soon as you pick it up. Wrapping your fret hand round a flattish, slim neck is reminiscent of Hagstrom's speedier offerings, and should be taken as an invitation for all intermediate shredders to super-size their arpeggios and take their playing to the next level.

There are plenty of guarantors of quality that will help the XM-DLX2 punch its weight in a market where Jackson's Dinky and Ibanez's RG series offer stiff competition. With such bullish moves as to glue a maple neck to a solid mahogany body, fit Grover tuners and a tone-preserving Graph Tech TUSQ nut as standard, Washburn means business.

Though the sustain might not reach Les Paul levels of tantric eternity, it's not too far off, and tonally the XM-DLX2 is well-serviced by the Duncan-designed pickups.

With the gain cranked up, the bridge pickup is all responsive tight crunch, with a vibrant tonal response that's just the ticket for squealing harmonics. In the neck position, there's plenty of thickness and warmth.

Alnico magnets in a humbucker pickup should make you think vintage tone, with said pickups generally lower in output in comparison to their ceramic counterparts. But having proved capable, and indeed at home with rock and metal, it's great to learn that rolling off the gain emphatically proves that the XM-DLX2 is no one-trick pony; the neck pickup easily handles fat, rounded jazz/blues tones with the bridge pickup fluent in Skynyrd-esque raunchy pickin' country.

OK, we'd never send Washburn out to buy us fruit if this paint job is its idea of tangerine, the XM series has a carbuncle of a headstock - and it's a bit too dowdy to drop jaws when resting in the stand. Aesthetically, there are better guitars at this price.

But to moan about such things is to sound shallow when you're confronted by an instrument as good as this one.