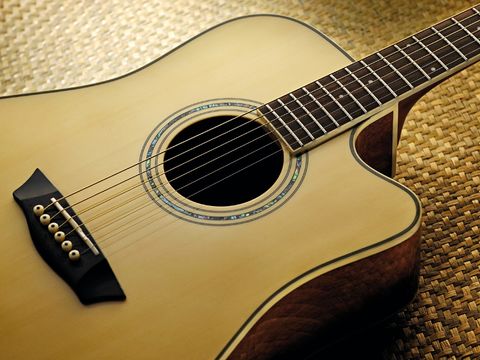 An interesting alternative to a 'regular' shaped dreadnought that proves to be a capable electro.

Depending on the angle at which an acoustic guitar is held when playing - particularly seated - it can dig in to your chest, causing some discomfort and leaving an unsightly wave-shaped welt as evidence of your noodling.

Earlier this year, Washburn launched a small range of guitars that seek to solve the problem and make playing an acoustic an altogether more comfortable experience.

Think of the curves shaped into a Stratocaster's back; in essence, Washburn's new guitars are a much less exaggerated version. Unsurprisingly then, the range has been given the monicker the Comfort series.

The WCD18CE's body is formed entirely from laminates: book-matched spruce-faced for the guitar's top and mahogany for the back and sides (the back also book-matched).

A tasteful abalone transfer sits within an uncomplicated soundhole rosette - the WCD18CE's only noticeable decorative appointment. Simple, cost effective binding has been fitted to both sides of the guitar's body, the mahogany neck and headstock.

Of course, the key aspect to this guitar is whether the shaped back results in a more comfortable playing experience. In short, it does.

Though subtle in appearance, the strategically placed 'scoop' on the upper side of the back does definitely 'hug' rather than 'dig' and, to that end, mission accomplished. Whether there are sufficient numbers of guitarists out there struggling or in pain due to the shape of their acoustic is debatable, but it's good that Washburn has offered a choice at this price - other contoured acoustics appear in small 'boutique' maker ranges and will cost a lot more.

Although very much an entry-level model, it's good to see rosewood used for the bridge and fingerboard, upon which 21 well-finished, medium frets are seated. Tuners are unbranded, die-cast chrome enclosed specimens and the guitar is factory-fitted with D'Addario strings.

Overall, the WCD18CE is fairly well presented although, for some, the high-gloss finish will feel a little too thick and there's some evidence of retrofilling around the point at which the headstock angles away from the neck. Inside, though, it's clean and tidy.

The Fishman preamp's control panel is located on the upper shoulder and features bass and treble rotaries, a larger volume rotary, and phase and tuner push-buttons - the latter operating even if no cable is attached for unplugged tuning.

The WCD18CE offers a dry, woody but likeable, if not particularly characterful, tone. Of course, this is an electro targeted at the cost-conscious and, while not offering the dynamic and tonal range of more expensive instruments, the WCD18CE does have plenty of volume, good sustain and a spring in its tonal step.

The Venetian cutaway facilitates good access to the upper registers and the WCD18CE's treble is clear and bright enough to encourage venturing up the dusty end.

Employing the services of the Fishman onboard pickup reveals a capable system providing a punchy amplified tone. The bass and treble controls work well and offer excellent tonal variations - certainly more than the guitar offers acoustically.

This particular model does come without the electronics (and cutaway) priced at £174. We'd suggest that for the extra £36, the electro version represents a good buy and value for money.

Tonally speaking, the WCD18CE is not exactly going to set the world on fire, but that's not really the point of this guitar. As its name suggests, the primary purpose of the Comfort series is to offer a more form-fitting body shape.

Washburn claims that the Comfort series will allow for "advanced precision and tonal control". We'd argue that particular point, but what Washburn certainly has done is fulfil its design concept, and this will appeal to those whose playing experience has suffered as a result of a 'fullbodied', larger guitar.