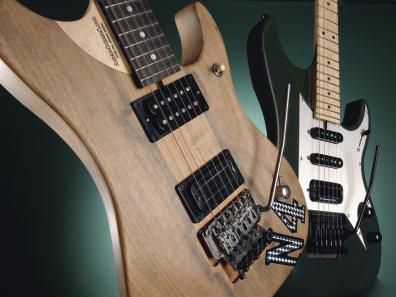 You´ll either love it or you won´t, but the vibe of this instrument, and more importantly the performance, is truly staggering. For those moments when the funk just has to be gotten out, there´s no more suitable guitar on the planet.

Nuno Bettencourt initially made his name back in 1990 with a guitar he fashioned himself from various parts - an unfinished Schecter body, a Warmoth neck and so on - but it wasn't long before US giants Washburn snapped him up by offering the opportunity for a dedicated signature model.

The resultant model, the N4, was released in December 1990 and offered such idiosyncrasies as a through-mounted Bill Lawrence bridge pickup, a single volume pot secured by an inch-long screw and, most notable of all, a somewhat garish prismatic sticker.

While several variations have followed, courtesy of Washburn's renowned Chicago custom shop, the N4 Vintage is an artificially aged version of the model that started it all. For fans, this is the closest you will get to owning Nuno's original.

N4s and N2s from the nineties included the trademark prismatic sticker as an optional extra - to affix or not affix was always the conundrum. Here it's a permanent fixture and other similarly idiosyncratic features included with this package are an original Floyd Rose, locking DiMarzio strap and a flight-case so robust it could possibly double as a coffin.

The neck features an ebony board and in addition, Washburn has aged the back of the neck as well as the body alder and hardware.

We were convinced that the feel stakes couldn't be raised any further but, such is the worn-in feel, this is a very difficult guitar to put down for any length of time. It really is an absolutely wonderful instrument to play.

As an ever-reliable method of squeezing as much tone as possible from any solidbody guitar, the Bill Lawrence L-500 in the bridge is secured not only to the body top via the surround but also by a pair of screws all the way through to the rear: now that's what we call an intimate join.

There's a Duncan SH-1 '59 'bucker in the neck position and, in the continuing spirit of total authenticity, the single volume knob is fixed firmly to the pot by a two centimetre crosshead rather than the traditional grub screw.

The ageing itself, as ever shrouded in mystery with Washburn refusing to spill even a single haricot, has been applied very well indeed and it's worth mentioning that the company hasn't included any fake dings or dents into any of the wood as part of the process.

We're happy to report that the sumptuous playing experience is enhanced further when the guitar is plugged in and, with a classic rock tone including medium levels of gain, the guitar roars, simpers or just plain sings with conviction.

Bettencourt is best known for a searing tone courtesy of the ADA MP-1 preamp and the N4 seems to be able to cope with even the dirtiest of preamp-driven tones. Chords and rock rhythms are full and firm, with solos and single notes equally girthsome.

The only criticism we could come up with is that some clarity is lost when using the volume pot to regulate overdrive. Be aware that the screw sticking out of the speed knob can, if you're not careful, dig into your right hand when immediate muting is required: investing a couple of nuggets in a grub-equipped knob may save your wrist veins from serious damage…