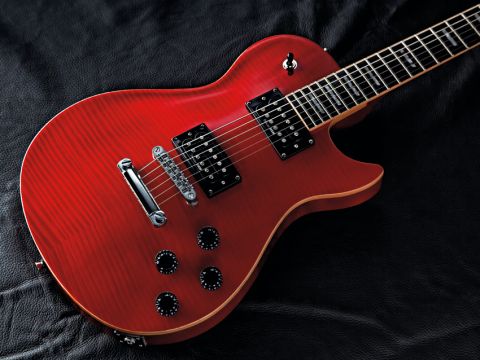 Affordable, good-looking and a great player - an impressive guitar.

The myriad Idol models were, for many years, the bread and butter of a particularly tasty Washburn sandwich that still includes some excellent electrics and acoustics.

In fact, of such a quality were the Chicago Custom Shop versions of the Idol that models such as the
P2 and P4 made perfectly acceptable alternatives to an US-made Gibson Les Paul.

"Strapped on, the guitar's well balanced, the wide, flat neck is great to play and it looks pretty cool too."

However, the company has now taken the decision to revamp the Idol from the ground up and although it would seem that the reasoning would include intent to make a foray into Gibson and Epiphone's customer base, there is a little more to it than ugly old commercialism.

That said, the body shape is certainly one to add to the 'almost, but not quite, a Gibson' file alongside guitars such as ESP's Eclipses and PRS's Singlecuts. Gone is the old Idol's wide lower cutaway and more extreme contouring of the top, in favour of a shallow arch and cutaway of a more traditional style. Fashioned from a solid mahogany spread, the body is topped by a 10mm-thick maple cap faced with a flamed maple veneer and our version is finished in an unashamedly intense trans red.

The natural-colour maple 'binding' (masked-off finish a la PRS) reveals the maple cap's depth, but the red is see-though so the line looks like it's in the wrong place, given that it's not right on the join of maple and mahogany. The three-a-side flared headstock houses Grover tuners and a Graph Tech Tusq nut. It feels comfortable, with a wide, flat and shallow 'D' profile: more modern than vintage in feel.

The pickups are another new feature, and appear on three of the five guitars included in the range. The Duncan USM humbuckers represent an OEM collaboration between Seymour Duncan and US Music Corp (the parent company of not only Washburn, but also other big brands such as Randall, Parker, and Eden).

Produced just for use on Washburn and Parker guitars, there are two options: the
high-output HB-103, and the subtler HB-102 units that are loaded into the WINPRO. Based around an Alnico V bar magnet, the tone, on paper at least, is intended to be in the realm of a hot-rodded PAF, with the associated perceptions of a biting yet vintage-flavoured Gary Moore-type performance.

Both are controlled with their own volume and tone controls. Sadly, the latter are of a standard type: the Voice Contour Control controls - which enable you to choose if the pickups' coils operated in series or in parallel, drastically improving the tonal versatility of the likes of the Idol WI65 - have fallen by the wayside.

This is a thoroughly modern single-cut, not only in style but also in tone. And although the aggressive treble of the Gary Moore-like tone is present, there's not quite as much depth. Still, that's what we'd expect, and full chords ring out very nicely indeed.

Going for a Slash neck tone, we find the results are not as authentic as we'd hoped - the pickup is more transparent and lacking in thickness. We'd wager too that the pickups are actually hotter in output than we'd assumed, as full-on rock riffs sound great.

The sound isn't as spiky as Zakk Wylde's signature tone, but is more compact and focused than, for example, Luke Morley of Thunder's Kossoff-inspired roar. Strapped on, the guitar's well balanced, the wide, flat neck is great to play and it looks pretty cool too. Win indeed.

Washburns at this end of the market are often competitively priced, and that's the case here. £348 seems almost impossibly meagre considering what the guitar offers and, although it's not perfect or that original, you may well be torn between this and an Epiphone when the time comes to go shopping for
a new single-cut.