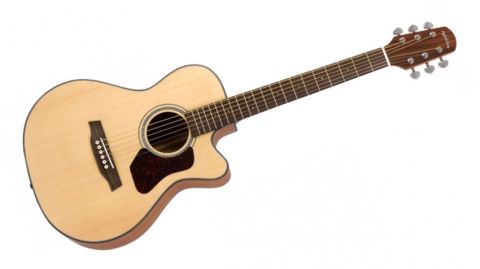 The T550CE feels more manageable than a full-size acoustic, sounds great raw and cleans up nicely through an amp. Make room for it in the hold of your tour bus...

Travel guitars typically tend to find favour with two particular types of punter. The first is the free-spirited road warrior who goes where the wind takes him and wants a guitar to pluck under the stars and tie onto his backpack when he's moved on by the police.

The second, more petite players who find that a full-size, deep-pan dread is just too much timber to wrap their hands around.

Only a fool would shell out £360 for a campfire guitar, but the spec and build suggest this Walden has broader horizons. It's traditional, with a solid slice of spruce and laminate mahogany body offering a more classic look, bolstered by scalloped X bracing.

But it's never dull, with the gentle slope of a Venetian-style cutaway and a Fishman Aero+ Classic 4, complete with a versatile EQ. The headstock even looks a bit like Brian May's Red Special: another good omen.

Pass the T550CE in a guitar shop and you'll give it a double take. There's a vague parlour vibe to the 7/8 size, but the lower bout is a voluptuous 355mm at the widest point, while the depth is a not-too-emaciated 112mm at its deepest.

So, it's bigger than some travel acoustics, and admittedly doesn't have the grab-and-go portability of smaller models, but physically we found this guitar to be a strong halfway house.

It's still less overwhelming than a standard acoustic, sitting light on the lap and letting you command the fretboard, but while other travel acoustics can feel cramped, this guitar's 614mm (24.2-inch) scale length and string spacing are pretty much bang-on; nothing feels like a grimace- inducing stretch, but neither do your fingers tie themselves up in knots on a constricted playing surface. The cutaway makes this guitar feel like a more practical working instrument, too.

The T550CE is really resonant, full and balanced, with the volume to cut through festival background noise, even when it's 3am and everyone's been caning the After Shock.

Critically, while there's strong definition and a spruce-powered snap, there's also a real warmth from the mahogany, meaning that finger style rings out with purpose and strummed chords never sound brittle or rasping.

Best of all is that the preamp lets you fine-tune that voice via a three-band EQ and, twinned with a decent acoustic amp, there's no reason why this guitar shouldn't service your needs in any situation, whether playing live or recording.