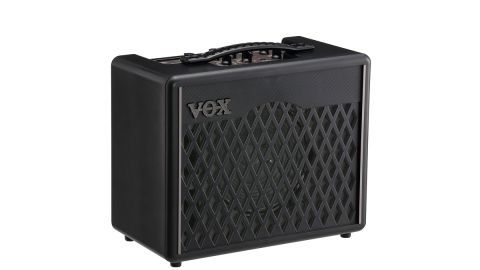 A great value practice amp that could work a treat for small gigs too.

The humble practice amp isn't so humble any more - there was a time when a practice amplifier was a bare, stripped-down, low-power version of its larger stage cousins, with little or nothing in the way of features.

Today, practice amps are taken seriously by most major manufacturers, with many offering more bells and whistles than you'd find on a modern stage rig. Vox's all-new VX range is no exception, and the VX II combo we're looking at here has 11 different amplifier models, together with digital effects, alongside traditional gain, volume and tone controls.

The VX II's top panel also includes an aux in and headphone socket, with buttons for accessing the built-in E tuner, patch store/ recall and tap tempo control for delays and modulation effects.

There's also an overall power control - the VX II's master volume models output stage distortion, so it's possible to get that proper 'cranked-up' effect at any volume. The VX II looks smart, and because the case is ABS plastic, it's very light, too, with an external laptop-style power supply providing DC power to a socket on the rear.

There's nothing lightweight about the VX's sounds, though - Vox has upgraded the now- familiar models from its Valvetronix range using VET (Virtual Element Technology) - which models individual amp components - for an even more realistic experience.

The 11 amp models cover classic cleans and mild blues, through to insane overdrive and distortion. Naturally, Vox sounds are well-represented, with authentic versions of the vintage AC30 normal and Top Boost channels, alongside well-known amp models from both sides of the Atlantic.

The effects include chorus, flange, phaser and tremolo, together with warm-sounding analogue and tape echo delay models, and a choice of spring or hall reverbs.

A USB socket on the VX II's rear allows connection to your Mac, PC or iOS device, with extra features and patch storage courtesy of the Tone Room editor/librarian app, and hours of practice fun using Vox's JamVox III amp and effect-modelling software, which can extract the guitar track from most songs, letting you take centre stage with your favourite band.

Traditionalists may tut-tut about the plastic cabinet, but we don't think it hurts the tone at all, and if it helps keep the price down that's fine with us. ABS is tough, hard-wearing and recyclable, so why not use it for an amp cabinet? As for sounds, we don't know exactly how VET does its thing, but the end result is an amp with some great tones.

If anything, the VX II sounds better than its Valvetronix predecessor, with a more valve-like dynamic response and smoother, more analogue-sounding effects that provide excellent results for recording and live use - and with up to 30 watts on tap, you could use the VX II for small gigs to boot.