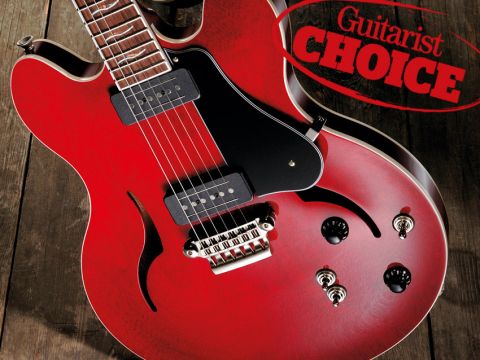 The subtle updates to this Mk II Virage DC enhance an already excellent design that might have started with an ES-335, but ends up a more ergonomic, resonant and versatile guitar.

The original two Vox Virage guitars were launched in 2007 and over the past months we've looked at the new and expanded 2010 range - the 33, the 55 and 77 series. Finally we get a chance to look at the latest versions of that original Virage duo, now in their Mk II incarnations: the guitars that have inspired the lower-priced ranges.

The Virage range, which takes its name from the French word for bend or turn, comprises just two guitars: the single-cutaway (SC) and double-cutaway (DC). The former style appears in both the 33 and 55 ranges, but as a solidbody - the Virage SC is semi-solid.

The round-horned and clearly Gibson ES-335-inspired Virage DC is unique to this upper range, although its contoured and innovative semi-hollow body construction is utilised on the sharper-horned HDC77 model.

But there are plenty more stylistic similarities, not least in the fact that all the 2010 guitars use the same MaxContact bridge, the same CoAxe pickups and the 3D-style contouring of the bodies, which inspired the guitars' name.

However, unlike the other models, these Virages are made in limited numbers in Japan (as opposed to Indonesia) and are vastly more expensive guitars, aimed at 'connoisseurs' or 'artists'.

This deep cherry-finished DC is constructed from solid African mahogany, which makes it substantially different from the ES-355's laminated maple body and mahogany neck.

Yet while the inspiration is obvious, it's no more than that, even the size is different, with the Vox about 10 per cent down-sized from the ES-335.

The DC's body is constructed in two halves - top and bottom. Each part is carved inside and out on a CNC router. The top has a lovely, deep violin-like dishing, as does the back.

Internally the majority of the wood is removed, leaving only the rims and the two prongs (or tone bars) of the partial centre block, like two over-sized bass bars running through the centre of the body from the neck to the feet of the MaxContact bridge.

Aside from the top and back carving, the body is also curved in profile. As we've said before, it's like taking an ES-335 and bending it around your body. It's one of the few modern electrics that really couldn't be carved by hand.

The execution is faultless, the clean white bound edges are crisp, the unbound f-holes (mirrored in shape by the fingerboard inlays, headstock motif and even tuner buttons) are very cleanly cut and finished - and the overall finish (which is polyurethane) is clearly thin and faultless in application.

The neck is no different, joining the body over a protruding heel that's all but removed in front of the curved rear binding. The feel is a full but shallow sided 'C' (21.5mm at the first fret; 22.95mm at the 12th), and while it's certainly not overly big, it has enough meat not to feel skinny.

Again it's cleanly bound and the rosewood 'board features 22 faultlessly installed medium jumbo frets with ends that sit over the binding for maximum playing width.

In comparison to the body's modernism, the lightly back-angled headstock is simple and classic with a relatively subtle Vox logo and colourful shell inlaid motif on the otherwise black face.

The nut is classed as 'synthetic self lubricating' though it looks like bone and is superbly cut. The string grooves are perfectly smooth and friction free, and the out-of-the-case set-up with 0.010s has a little fight. Nice.

Both guitars in the Virage II range use the same hardware and also electronics (which are the same on the 55 and 77 series and slightly simplified on the start-up 33 series).

Again superbly engineered, the cast aluminium MaxContact bridge has tune-o-matic- like saddle adjustment in that the height is altered by the two posts that hold it in place.

The strings enter from the rear, unlike a wrapover-style bridge, and about the only criticism we can level is that if your strings have rough wraps above the ball-end, you're going to feel them when you palm mute. Those uniquely shaped buttons certainly don't harm the tuners' performance either.

As with the other new Vox guitars we've recently reviewed the CoAxe pickups are different in design from the original Three-90 pickups, co-designed with and made by DiMarzio.

"This arrangement results in a good range of tone change across the modes, but for the next pickup we wanted to bring up the output level of the 'clean' mode while adding some emphasis to the attack on all modes.

"The benefit of this arrangement is that the hum-cancelling coil has both the six pole-pieces and the two blades as its core, so it requires less wire (about a third of the turns) to reach the same noise sensitivity as the centre coil.

"Less wire means lower impedance, which means the high frequencies are all there, but the noise isn't. Both the sensing and hum-cancelling coils are tapped, so we're able to achieve different tones and levels by engaging different parts of the coils."

To achieve the three modes that Kirkland describes we have a pair of chunky three-way switches that select, for each pickup, the clean (single-coil-y), crunch (P-90-ish) and lead (humbucking) modes. Then we have the similarly chunky three-way pickup selector, plus a master volume and tone.

The combination of its light weight and resonant unplugged tone means that we're champing at the bit to pick the DC up and get playing. Strapped on it has a slight neck pull, but thanks to its lightness this easily balanced by your right forearm.

Initially the three humcancelling modes sound quite close, without the volume drop of the clean mode that we remember from the original Virages.

In truth the mode switch is more of a 'character' switch. Pushed down we get the lead voicing, a little fruitier with a rounded nose; pushed up we get the clean voicing, extra sparkle and less thickness.

The middle position is crunch, which sits in between - a little wider and fuller than clean but still with sparkle and a slightly down-shifted mid-range character.

If you're expecting three vastly different sounds you'll be disappointed, but use the nicely graduated volume control to clean up the clean mode, for example, and the subtle characters become much more distinct.

Overall the DC, certainly in this body wood, has a good balance of dark and bright. Up the gain, switch to crunch bridge pickup and the edge of the P-90-esque tone works excellently with that depth, while the lead setting sounds more focused and chewy - both are great classic rock rhythm voices.

The neck pickup works just as well - it's vocal but with depth and enough attack so that it doesn't sound too soupy. Again the crunch mode adds a little edge and cut. But it's the clean mode that surprises; more crystalline and clean, it laps up gain to offer an almost Tele/ ES-335-like hybrid.

Both Virage II guitars edge into tuneful feedback when you need them to but, unless you really up the gain and volume, aren't troubled by intrusive howls. Like a classic Vox AC30, neither they don't seem to want to do metal, but for a more organic, rootsy, classic rock they're bang on: cleans sound crisp but not sterile, and with a little tone roll off you're into Gretsch semi-solid territory.

Mid-crunch tones have depth and body but zing if needed, while old-style blues sound really good on the clean modes; and higher octane blues-rock wailing is easily achieved with the lead modes. Of course, clean things up and the DC has a very usable jazz voice.

As befits the Vox name, the Virage II guitars reflect over 50 years of rock and pop, somehow touching all those bases but retaining their own specific character.

In that way these Mk II versions sound perhaps less three-guitars-in-one, and more one guitar with three characters that, if used with different amp tones (and the guitar's volume and tone controls), will reward the player who understands sound: these are very, very musical instruments indeed.

Both are superbly made, with the more modern design flourishes enhancing the experience without feeling 'new', and both guitars also look appropriately classic without in any way cloning the instruments on which they're clearly based.

Modern guitar design doesn't get much better than this. There's no denying this is a pricey guitar, but careful quality like this is never cheap.