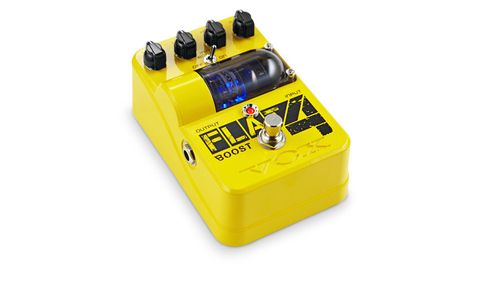 A versatile boost pedal with tonal options and low-level overdrive.

As a boost pedal that can offer tonal tailoring, too, the Flat 4 has a passive Baxandall EQ circuit with knobs for low and high frequency plus an optional mid boost.

All of the pedals in the Vox Tone Garage range have a standby/on switch as you might find on a valve amp. While the thinking behind it is admirable and should extend valve life, it's yet another thing to check when setting up for a gig. When in standby, you won't get silence because the pedals have true bypass,but you won't get the effect, either.

If you're looking for clean boost, this pedal can deliver it - set the tone neutral, keep the gain knob right down, whack up the volume to deliver the desired jump and you've got it with no apparent tonal change.

If change is what you're after, however, the tone knobs cover a good range that can set the pedal up as a treble boost or fatness generator, and with the mid boost engaged you get extra presence as well as volume for solos.

It's the gain knob that's of most interest, though, as it adds a nice crunch to the sound. If Vox had decided to call this an overdrive pedal instead of a boost, no-one would bat an eyelid.

Boost or overdrive, this is a pedal that offers plenty of options for tweaking your signal, especially for blues players who want to add some grit to their tone.