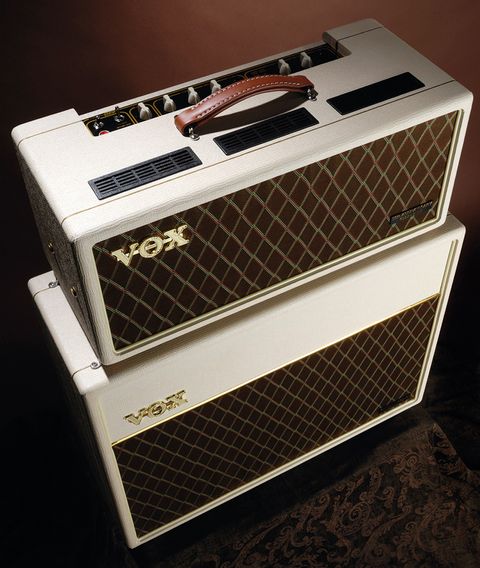 For rootsy rock and pop it's hard to beat at this price. The best new AC30 yet for stripped-down, clean/crunchy goodness.

The very term Vox AC30 exists in six-string vernacular as if it were some single, identifiable thing. Yet in reality - just like the Fender Twin - the model has changed wildly over the years with any number of updates, reissues, signature models and more.

Celebrating Vox's 50th Anniversary, the new Heritage Collection amps - topped by this head and its matching 2 x 12 cabinet (£629 with twin Celestion Alnico Blue drivers) - boast 'hand-wired' among their features list. Highly prized among boutique amp fans, this method of construction can be extremely labour intensive and therefore costly. Thus these new amps are designed in the UK, but built in Vox's Chinese facility, which has proven its worth with the Custom Classic series.

The big news for the Heritage Collection AC30s are the choices for the two channels. Most Vox enthusiasts agree that a mid sixties Top Boost is the number one AC30 sound, so that is the basis for channel two.

Controls are minimal with a single volume pot, the Top Boost bass and treble circuit, plus a pair of inputs for high and low gain. Channel one, meanwhile, is built on the venerable EF86 preamp valve, a feature of some 1950s Vox amps and re-popularised in the 1990s, principally by the droolsome Matchless DC-30.

According to many amp designers it's a difficult valve to work with, partly because good new ones are in short supply and partly because it's a feisty little blighter electronically. In addition to the single volume pot - gain and master all in one - you have a three-position brilliance switch, a two-position bass shift and finally the option of running the EF86 valve in triode or pentode mode. The latter offers the full gain potential with a fatter, juicier response, while triode returns a cleaner sound and more headroom.

The two final features work across both channels. The first is Vox's top cut, which cuts high frequencies after the main preamp sections, and last but not least is a triode/pentode switch for the quartet of EL84 power valves. According to Vox, this drops the power from the full 30 (pentode) to 15 watts in triode, enabling you to squash the power amp a little more at lower volume levels.

Save for a couple of speaker outs, that's it. There's no reverb, no tremolo or vibrato, no effects loop. You don't even get a standby switch - it's automatic.

The AC30 Heritage Collection chassis follows the traditional Vox 'L' shape design, with power and rectifier valves sat vertically on the 'foot' of the L between substantial mains and output transformers, while the preamp valves also sit vertically on a small bracket inside the vertical part of the L.

Access to preamp circuitry is good, not so to the output stage - if you need to change an EL84 you have to remove the chassis to do it. Layout and component standard is pretty good, with the preamp and power supply circuits built up on hybrid PCB/turret boards - the resistors and capacitors are wired to small nickel silver turrets in traditional fashion, with PCB traces replacing the wire links you'd see on an original Vox.

This means that servicing is relatively easy, while the PCB links offer improved reliability and consistency, as well as more freedom in component placement. The EF86 preamp valve is covered in heatshrink, to help reduce microphonic ringing at higher volume.

EF86s always were pretty unreliable - like the early EL84 valve they were intended to sit inside radios and record players, not get shaken apart in a guitar amplifier. The heatshrink might reduce cooling a little but this isn't going to be a big problem as the EF86 doesn't get as hot as an EL84.

The overall quality is up there with the rest of the modern Vox range - solid, reliable and value for money.

Despite the ostensibly spartan control panel, channel one is capable of a wide range of tones and textures from that hoodlum EF86. The high- and low-gain input options are separated by 6dB, so with a Strat's single-coils, for example, the higher gain input feels right: strong and full. If you want clean sounds from humbuckers, it's worth experimenting with the lower gain input.

The core tone is open and breathy as you'd expect from Vox; crystalline highs, but with fatter mids and a more furry edge to the drive than the Top Boost channel. There's no master volume, so if you want drive you have to turn it up; a natural, vintage-flavoured overdrive sets in around 10 o'clock with the EF86 in pentode mode.

With the power amp set to the full 30 watts, we're talking serious volume by now. Flick it to half power and you can enjoy more drive without popping those eardrums; everything smoothes off for a rounder, more compressed tone.

If you're mic'ing up, fine, but lead players with a loud drummer will find the low power setting too quiet in a belting band mix. It's great for fat rhythm chording, however.

Still in channel one, the bass shift function tightens the bottom end to remove some of the mud from 'buckers, and is especially welcome at higher volumes where you can lose note definition on low notes and chords.

At the other end of the frequency spectrum, the brilliance control replicates the early AC30 'treble' circuit and the classic 'brilliant' channel respectively. To our ears, position
two sounds very thin and brittle, rescued slightly when the whole thing is cranked and driving, but most ordinary rock and roots tones are in position one and 'off'.

Given that the top cut control is a very effective presence/high end control, we'd happily sacrifice the brilliance switch function for something else: reverb, maybe?

And all that before we've even plugged in to the Top Boost circuit. Now this is the Vox sound, no question, with those powerful, interactive tone controls; everything at two
o'clock or thereabouts with a Strat - it's just pure magic.

Perhaps there's something in the simplicity of the circuit, perhaps it's the matching cabinet's Blue speakers... whatever it is, it's a fine reinterpretation of that classic sixties sound and as good as we've heard from any new AC30. It's also highly sensitive to picking dynamics essential for low- and medium gain players.

Despite the name, the Heritage Collection hand-wired AC30 is definitely not a mere exercise in nostalgia. With the fabled Top Boost channel on one side and the EF86 preamp on the other, this amp delivers perhaps the most desirable set of tones yet from a modern AC30.

That does come at the expense of tremolo, reverb, master volume or an effects loop, however. Should you buy one over the Custom Classic series? The EF86 channel will be one major swinging factor, the other will be your preference for a master volume - this amp doesn't do quiet.