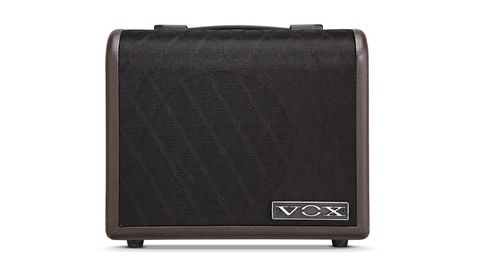 A really neat, portable and stylish amp with choice of channel voicing and good potential for a little sonic abuse.

The acoustic guitar amp market is small - much like the majority of its products - but for those of us who rely on an amp as our main amplification source or as a personal monitor DI'd into a PA, these small boxes are crucially important.

As we've said in the past, amplifying an acoustic guitar isn't always easy and, ironically, the further down the food chain you are in terms of your gigs, the harder it can be without the benefit of spacious stages, soundmen, monitor engineers and the like.

The dual-channel Vox is the smallest powered amp in the valve/solid-state range (the AGA4-AT is all-valve with a four-watt output). It's a very reasonable 6.5kg and boasts a valve preamp stage in the Tube Pre channel that's designed for mic or guitar, with 30 watts of output power from one 6.5-inch speaker. It's not big on feedback control, however, offering a single-control sweepable notch filter.

"The AGA30 is portable and stylish, too, with its rounded top edge, classy diamond-weave grille cloth and a dark tan vinyl covering"

The AGA30 is portable and stylish, too, with its rounded top edge, classy diamond-weave grille cloth and a dark tan vinyl covering. Its controls are top-mounted on a black fascia that should be easy to view in a live situation, even though the cream plastic chickenhead knobs are sizeable.

EQ is limited to just treble and bass on both channels, but at you get individual channel volumes, each with a clip LED, plus a master volume. This is ideal if you've precisely set your guitar and vocal levels and then have to turn up or down.

Along with the potentially handy low/ high-gain mini switches for both channels, the guitar/mic channel has a phantom power facility for condenser mics and, of course, that 12UA7 in its preamp. Another handy button is the All Mute switch, which mutes the output of the amp but not the signal going to the jack-only direct - be careful when changing guitars if you're plugged into the PA.

The two channels here can provide quite different sounds. The valve-driven guitar/mic channel has a thick, warm and old sound to it - over-push the EQs, though, and although the clip LED doesn't light, we hear some farty distortion. With the same settings, the non-valve channel sounds cleaner and a little more hi-fi. With a simple A/B box, you can actually have a kind of rhythm/lead thing going on just by switching between the two channels.

To say the AGA30 is certainly not the loudest Vox to have a 30 in its title is an understatement and it doesn't quite sound comfortable with its wick fully turned up. But, although to our ears it does seem to have a pretty wide frequency response, there are some older, darker sounds in here that certainly might help the recording acoustic player wanting a dirtier voice as an antidote to the often over-pristine sounds of the modern steel-string.

The reverb is okay, again a touch full on, and the chorus sounds very modern - a little against the overall tonality, we felt. It's loud enough for small gigs but little more, although that valve preamp swings it for us, especially with some abuse.