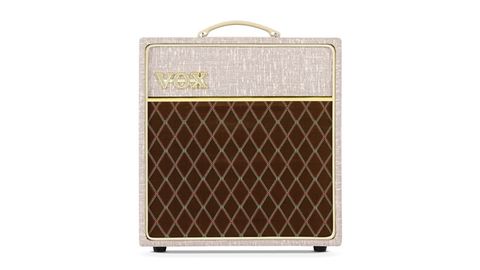 For recording, this could be all the amp you ever need.

The all-but-identical circuit had been around since 1958 in the AC2 and AC6, but it all came together in a familiarly attractive package the same year The Beatles debuted with Love Me Do, The Shadows chart-topped for an eternity with Wonderful Land, and Jagger and Richards - who lived just a pebble's toss from the Vox factory in Dartford - hooked up with Brian Jones, Charlie Watts and Bill Wyman to form The Rolling Stones.

This new amp is not a reissue of any particular AC4 model; rather, its a cosmetic cousin of differently styled early Voxes, built for today's practising or recording guitarist. That it employs one of the most historically significant and drop-dead gorgeous looks in all guitar ampdom is a happy bonus.

The new model is based upon the EL84-driven Top Boost circuit beloved of those 60s Brit bands and of the world ever since. Built in Vietnam it has has the simplest of control layouts and is designed to offer classic tones for home practice, rehearsal, recording and even small gigs.

In classic fawn and diamond cloth livery, our hand-wired model's larger cabinet puts it into serious contention as a recording amp. Its grown-up dimensions have allowed a 12-inch Celestion G12 Greenback to be fitted, and we're hoping this marriage of Vox and vintage Marshall tone will be one made in heaven.

The cabinet is birch ply, and with gold trim and cream AC30-style top handle, it's a pretty picture. It employs the anachronistic rear-facing control panel originally, it was presumed guitarists would sit alongside their combos, not stand with the amp behind them.

On the back panel, we find 16-ohm speaker extension and footswitch sockets the footswitch operates the amp's Hot and Cool functions. In Cool mode, the amp is like a regular Top Boost Vox, with all controls operating. Selecting Hot bypasses the tone pots for a thicker, more powerful sound Brian May has his AC30s modified in a similar way, for a pure, unfettered signal path.

Checking the internal construction requires the removal of a preposterous number of back-panel screws. Were a valve to die on a gig or session, a full half-hour more without an electric screwdriver would be lost just getting at it.

It's not just a Vox problem, since most manufacturers have fallen foul of this health and safety overkill. Mini rant over, the internal construction looks super-tidy: the three valves a single EL84 in the power stage and a pair of preamp 12AX7s sit directly on their PCB with all the wiring flawlessly executed.

Plugging in our Strat and Les Paul reveals some real grown-up tones. The 12-inch speaker and turret-board wiring bring greater breadth and openness to the HW's output. In Cool mode, the treble and bass introduce shimmer and roundness, while the gain pot brings on full, meaty distortion.

Our Strat felt very at home, offering all the chime and sparkle for which Class A amps have become legendary. The Les Paul was tight and punchy, and with cranked gain and the master about halfway, sweet lead tones abounded add delay and reverb at the desk and your recordings will sing.

Flip to Hot mode and there's a noticeable lift in volume and lower mids, letting heavier riffs and powerchords punch through. Jumping on a Fulltone OCD pedal highlights the Marshall-y edge already present courtesy of the Greenback. We love it, but you may prefer to push things in another direction with a different style of drive.

There's enough headroom for live rehearsals and small gigs, especially if you throw a mic in front and reinforce the sound through the PA. And if your rehearsal studio has a spare 4x12 knocking around, plug in your AC4 and stun everyone with its capabilities.

And that's the beauty of this amp: everything is available, from great pop tones into blues and classic rock territory. The sounds are so uncomplicated and instantly 'there' that you can augment it with your favourite stompboxes to create an amp that sounds like you.

The AC4HW1 has the advantage of a bigger cabinet than its Chinese-made sibling the Vox AC4C1-BL, as well as birch ply construction, turret-board wiring and, of course, that Celestion Greenback. Then again, at this price, you'll need to be a pretty serious recording guitarist, rehearsing two or three times a week with your band, or perhaps a busy solo player doing wine bars and the like to justify the cost.

A great grab-and-go tone machine and, while there's no reverb, it has wonderful clean and drive tones, all imbued with chiming Class A Vox tone.