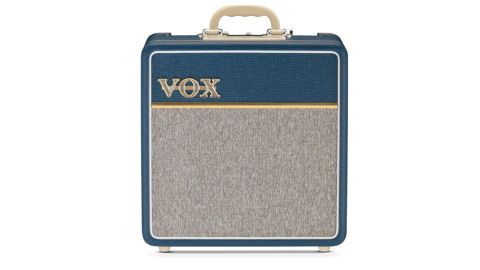 What's not to like (providing you're not changing valves in a hurry)?

The all-but-identical circuit had been around since 1958 in the AC2 and AC6, but it all came together in a familiarly attractive package the same year The Beatles debuted with Love Me Do, The Shadows chart-topped for an eternity with Wonderful Land, and Jagger and Richards - who lived just a pebble's toss from the Vox factory in Dartford - hooked up with Brian Jones, Charlie Watts and Bill Wyman to form The Rolling Stones.

This new amp is not a reissue of any particular AC4 model; rather, its a cosmetic cousin of differently styled early Voxes, built for today's practising or recording guitarist. That it employs one of the most historically significant and drop-dead gorgeous looks in all guitar ampdom is a happy bonus.

The new model is based upon the EL84-driven Top Boost circuit beloved of those 60s Brit bands and of the world ever since. Built in China it has has the simplest of control layouts and is designed to offer classic tones for home practice, rehearsal, recording and even small gigs.

The AC4C1-BL is one of the best-looking mini combos around. Its rounded corners, Tygon fretcloth and blue vinyl covering are complemented by cream plastic-ware, including a Bakelite-style hinged handle. Built with one eye on the price tag, particleboard cabinet construction and printed circuit board electronics are the order of the day.

There are no corner protectors, but then this amp is unlikely to be heaved in and out of vans. There is, however, attractive piping: in white around the front baffle and in gold across the top and down the sides; the Vox badge is gold, too.

Other co-ordinated touches include a cream plastic vent and similarly coloured chickenhead knobs. Simplicity is what this amp is all about. So, input, gain, bass, treble, volume, power switch and a small red light are all you get on the control panel. Around the back, things are even more sparse, with one 16-ohm speaker extension jack plus mains socket.

Checking the internal construction requires the removal of a preposterous number of back-panel screws. Were a valve to die on a gig or session, a full half-hour - more without an electric screwdriver - would be lost just getting at it.

It's not just a Vox problem, though, since most manufacturers have fallen foul of this health and safety overkill. Mini rant over, the internal construction looks super-tidy: the three valves - a single EL84 in the power stage and a pair of preamp 12AX7s - sit directly on their PCB with all the wiring flawlessly executed.

This is almost as 'plug in and go' as it gets. With volume and gain midway and the tone controls at 12 o'clock, a vintage Strat elicits a warm but sparkly sound from the neck and middle selections, although its untamed bridge pickup is a tad harsh. Knock the amp's treble back - or adjust the tone pot if your guitar has one - and things settle down.

A Les Paul on the same setting drives the front end harder and requires little or no treble adjustment - it's really tight, too. For humbucking tones, think Dave Davies/Kinks-style chords and fills; for single-coil sounds, imagine McCartney's licks on The Beatles' Drive My Car: crunch heaven!

Crank the gain to three quarters, leave the treble pot at around 25 per cent and the Strat gets tough and purposeful. Turn the guitar's volume down and it cleans up nicely, but with just enough edge for strummed chords and picked arpeggios.

Distortion-wise, there's not a great deal, even with the gain full up, but that was never this amp's remit: find its natural sweet spot, throw a stompbox or two into the chain - job done! There's no reverb, so you may well want some sort of ambience pedal; use the amp as your tone generator and add your fave stompers for colour.

Vox has got it just right with this little amp. The fairly priced AC4C1-BL would grace anyone's practice area - even in a posh living room. Although not big on overdrive and with no onboard reverb, the basic building blocks of Class A Vox tone and 10-inch Celestion speaker are so good that the addition of a pedal or two will have you playing away in whatever style you like - probably with a stupid grin on your face every time you catch sight of it.