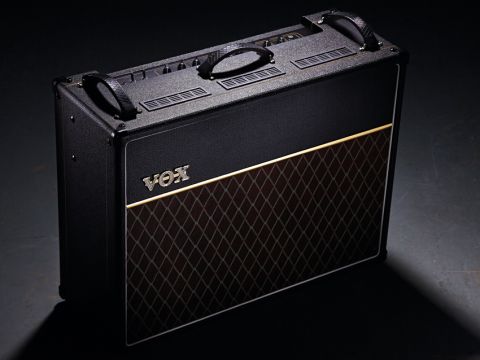 For anyone who hasn't kept abreast of the dear old Vox AC series evolution recently, your confusion is excused.

Almost annually since the reissues of the mid-'90s (that were made in the Marshall factory, as it goes), there's been a succession of ostensibly very similar black boxes with diamond grille cloth. What makes this one different? Well, for a start it's the first 2 x 12 AC15 we can remember in decades.

This new addition to the Chinese-made AC Custom range has quite a heritage, in name at least; it was among the first amplifiers to be designed specifically for guitar all the way back in 1958. Also, in 1 x 12 format it was the amp behind Hank Marvin and The Shadows on their first number one, Apache, in 1960. Then two years later, a young man named Lennon from Liverpool received his AC15 'Twin'…

But we dwell too long in history, however. The new AC15 'Twin' retains the all-important dual-EL84, cathode-biased output section of its forebear, but otherwise it's very different.

A quick scan across the top panel reveals two inputs for independent access to either normal or top boost channels, the latter having made its way into Vox folklore courtesy of its extra valve grunt and expanded tone section from 1961 (but not inbuilt until '63).

It's a shame you can't mix the two channels as you can on a lot of AC amps (using a 'jumper' cable between spare inputs) so if you want to do that, you'll need a quality AB/Y box and do it externally.

The normal channel works off a single volume pot that runs straight to the master volume and tone cut section. So unlike vintage AC15s, you can crank the front end to billy-o for crunchy drive, but keep the master low to protect the ear drums (and a harmonious domestic environment).

It's the same story for the Top Boost channel, except now you benefit from the extra gain in that circuit and its own bass and treble controls. If you're unfamiliar with classic Voxes (and old Fenders and Marshalls for that matter), you'll be surprised to learn that the separate channels are not independently switchable as you'd expect in a modern amp, so again you'd need an external A/B box to do that, if indeed you wanted to.

These amps aren't really built with that in mind, however: it's more a case of one sound or the other as the basis for your tone.

One benefit of the bigger, 2 x 12 enclosure is that it provides ample room for a full-length reverb tank, housed in the bottom. There's also an in-built tremolo effect, with controls for depth and speed.

In terms of general construction, the cabinet is built solidly from quality ply and covered in tough textured vinyl. A health-and-safety approved back panel stops you getting at anything inside but it's no biggie in this instance -changing valves on an AC15 or 30 is a nightmare anyway because of how the chassis is mounted, regardless of the protective panel.

The circuit is built around a modern, custom-designed PCB layout. It's one way in which Vox is able to keep costs reasonable while also ensuring consistency.

Most modern Marshalls, Fenders, Blackstar et al are made the same way, for context. In any case, if Vox could have made the amps as well as this back in the day, no doubt there'd be more of them still around and working.

But the whole point of this amp is the pair of 25-watt Celestion G12M Greenback speakers. They are the speaker of rock in so many cases and while purists might hope for Celestion Blues, they would add a good £300 at least to the price; and he increased power handling of two Greenbacks on the end of just 15 watts is quite a tantalising prospect.

First observations are that, yes, the twin-speaker format does indeed sound bigger, more airy and has a more solid bass response than its 1 x 12 sibling. The tonal signature is very similar as you'd expect, but the added depth and weight makes the Twin feel more powerful, no doubt helped by the increased power handling - and therefore later-to-break-up nature - of the dual speakers.

We often wonder why Vox bothers with the normal channel, which is not to say it sounds in any way bad, but that it doesn't have the punch, presence and all round musicality of the top boost channel. Perhaps players with very powerful pickups might prefer the normal channel, but if it's headroom you're after, the AC15 probably wouldn't be your amp of choice in any case.

The master volume set-up enables you to access tones ranging from chiming Hank-isms to more aggressive British rock 'n' roll, right on to classic rock drive. It stops short of fully saturated rock drive, but if you want that, just add a pedal of your choice. And if you want louder, buy the AC30 Custom!

It's worth underlining that the dynamics are subtly different from the bigger amp at low volumes and significantly so when cranked, but the general sonic footprint is very similar.

It's fair to say that even with the master volume set-up, the magic doesn't really start happening until the amp's lungs are at least half way open, but happily, that's not far from perfect for many of today's pub and bar gigs - it may even be too much for some.

There's always a sense of compression in the tone, in a liberating way that makes notes and chords fluid under your fingers. With a Les Paul, for example, there's a sweet spot where the low strings can push the amp into a lovely harmonic, very 'together', compressed drive, while single-note runs stay more strident and singing.

That's hard to achieve at realistic levels on many 50-watt-plus guitar amps. What's more the cut control enables you to have as much or as little of the famous Vox chime and top-end sizzle as you like, or indeed don't.

We get lost for hours in the top boost channel just on the edge of clean break up, master around half, with a great dollop of spring reverb and a slow, just detectable tremolo. With a Strat or Tele this is film soundtrack heaven. Licks, riffs, chords - ambient, evocative, addictive.

The big sell for the AC-series amps back in the late-'50s/early '60s was their 15 and 30 watts of 'undistorted' power. Fender, too, thought that was what guitarists wanted, because that's exactly what guitarists asked for. What they got, however, was the most glorious by-product: overdrive.

The AC15 'Twin' does sound magnificent when clean, but listen carefully to those amps or this and it's rarely completely undistorted. That harmonically rich drive that was never supposed to be there is the key characteristic that latter day, non-master volume AC users find hardest to replicate.

The simple fact is that now you can. It doesn't have the magic of the best '60s originals, but it's only fair to balance that by pointing out that we've played more than our fair share of vintage dogs too.

With twin speakers for the extra spread and depth, this is one AC15 that's so much more than a half-measure. There's literally nothing else quite like it out there.