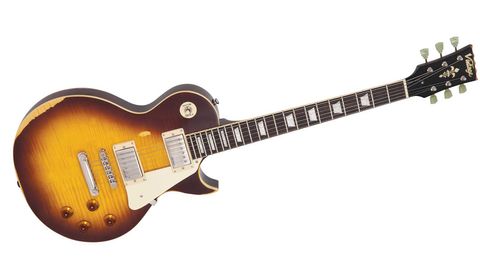 This is a proper instrument and, irrespective of your stance on the whole ageing concept, the price of £299 compares favourably indeed with the Epiphone LP100.

Chances are that you'll either hate or love the 'relic' idea, with the latter view enhanced if you'd had the fortune to see such a guitar up close.

Fender's Time Machine process is exhaustive to say the least, resulting in a degree of artificial yet entirely convincing wear and tear. Holding a 1959 Relic Esquire, you can almost feel the near half-century of history.

The opposing view is simple: why? What's the point of spending a significant wodge of folding stuff to buy a beat up guitar when you could revel in any one of the more affordable standard guitars?

A fair point too. So, all things considered, how would you feel about a guitar that's been artificially aged, yet has no significant history - certainly when compared against the likes of Fender and Gibson - to speak of?

Welcome two members of the Icon series, artificially aged versions of guitars already nestling in the arms of the Vintage range.

The very first thing you notice upon unpacking and picking up the V100 is the weight. Part of the very essence of Gibson's finest innovation is the sheer mass, and such is the weight of this single-cut that it actually passes the 'closed eyes' test alongside a Les Paul Standard.

The construction is similar too, at least in terms of the wood used: a body capped with a sliver of flamed maple and ultimately comprising two pieces of mahogany, albeit with the join in the region of the rear pot cavity.

Although this is an obvious copy of a world-famous design, simple parody isn't necessarily the whole story behind this and other members of the Vintage range.

Although the V100 is in the ballpark of a late fifties Les Paul, there's certainly no chance of anyone passing it off as the real thing.

That said, the real ace in the hole as far as both guitars here are concerned is the continuing influence of Trev Wilkinson.

Subtle touches such as the authentic look of his WJ44 tuners (the green hue of the tulip pegs is especially believable) against the just-about-perfect yellowing of the logo and inlay speaks volumes regarding the attention to detail within the obvious price-point parameters: even the headstock tapers in just the right way.

So, what about this ageing? "Well, everyone has their own idea as to how a guitar ages but the reality is that each one ages differently so there is no correct way of doing it," offers Wilkinson.

"We needed to go over the top a little bit more than the Time Machine Closet Classic style but not quite as far as a Rory Gallagher!

"We do in fact start with a virtually finished guitar just before it is ready for the final top coat, we then distress it using files, 80 grit abrasive paper, sharpened screwdrivers, Scotchbrite pads.

"Then we sand it smooth and apply a satin lacquer to give it a duller look. This also has the effect of sealing the distressing so that whilst they may look old they do not get any worse as they sit on dealers' walls."

It has to be said that the overall satin finish of this example is below par - we can't find any excuse for splodges of finish and other imperfections. But we applaud the wear applied to the forearm area of the top, around all four controls and by the cutaway.

Any ageing consequentially produces a smoothly worn neck and the V100 is no exception. Demonstrating a wide 'C' rather than a narrow 'U' shape, the guitar plays like the real thing up to a point and, thanks to the woods plus Wilkinson's always impressive WVC humbuckers, sounds credible too.

The strings on our example seemed a tad on the old side (that might be taking the ageing a little too far!) but this actually helped in attaining all manner of Les Paul-esque tones: Page, Slash, Hawkins and many more.

There's plenty of tonal push, neck pickup woof and bridge 'bucker bite, and we have no complaints as regards the fretwork either.