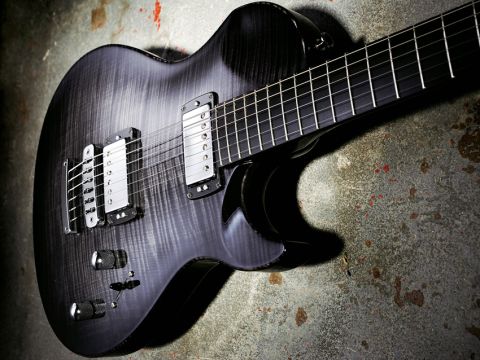 If you're yet to try a Vigier, start here. Great tones, wonderful feel and serious sustain are just some of its highlights.

Vigier's first single-cut model is named after Patrice Vigier's father, Georges, who passed away in July 2007. As part of that meaningful tribute, the GV's main thrust is sustain, and the desire to be different.

The singlecut body is alder, capped with uniquely contoured bookmatched flamed maple and it weighs in at just 3.3kg - that's less than even the noticeably lightweight Gibson Les Paul Axcess. At just 38mm at its edge it creates a welcome change from some other overly heavy and bulky singlecut designs.

Vigier has long utilised its truss rod-less 10/90 system that involves carbon fibre being inserted into the neck wood - flamed maple that's been dried for three years in this case - in order to improve stability.

Here oversized tuners, a custom-designed bridge and a Teflon nut keep everything anchored securely, without increasing the weight.

Surprisingly, considering the guitar's obvious heritage, the neck is bolted on rather than set. Why? "Because it [a set neck] is useless," says Patrice, controversially.

"I considered using a through-neck for a long time as I still think it's state-of-the-art, but it doesn't bring a plus to the sound. And it's the same with a set neck."

Even the fingerboard is different: Phenowood, a synthetic material intended to offer similar benefits to maple or rosewood but with added stability.

"It's primarily made of cellulose, like natural wood," explains Vigier. "The difference is that it's impregnated with a phenolic resin and it brings sustain to the guitar, as well as more stability and reliability."

Along with 22 medium frets we get Vigier's customary zero fret with an exemplary and low set-up; it's not quite in Shawn Lane Signature territory, but way down there nonetheless.

The pickup choice - two German-made humbuckers from Amber - continues the leftfield specification. "When I try pickups I make sure I don't know the brand name: I have just a number on the pickup," says Patrice.

"After two months it ended up that the Amber pickups were the ones that 'survived' the comparison. They are very musical and 'sing' with the guitar." The three screws enable both height and tilt adjustment and the dual humbuckers are controlled by a five-way lever selector switch and common master volume and tone controls.

Hear are five clips, starting with the bridge and moving through to the neck pickup:

The GV proves very versatile. Positions one and five voice the full bridge and neck humbucker respectively; positions two and four voice the split coils of the same pickups and position three combines both split pickups in parallel.

In full humbucker mode the neck pickup shimmers with a lovely glassy character and, irrespective of the amount of gain, sustains for ages. The bridge pickup, obviously, offers more treble but, even at low volume, a full G chord decays noticeably more slowly than you'd expect.

Clean, position three mimics a Strat's funk, albeit with extra guts and mid-range and by adding a touch of gain it's excellent for convincing blues rhythms too.

Ultra-gain settings benefit from the high-end projection, while the string separation means that even the most complex riffs - think Lamb of God on steroids territory - are rendered perfectly audible.

Conversely the basic metal girthsome crunch isn't quite as massive as with other single-cuts that we've experienced. That said, if you're after a different tone for this style, here's a definite option. But the superb neck, low action and reduced weight make the GV easy play and the almost frictionless 'board enables serious shredding.

If you're after a genuinely different, yet at the same time familiar take on the singlecut design, the GV is well worth your time and trouble. The undeniable clarity and definition, plus the excellent sustain in all five pickup settings make all manner of styles breathe with confidence: a very good thing indeed.

It is, of course, seriously priced, but the GV is all about quality. It looks the part and plays beautifully too. We suggest you try one.