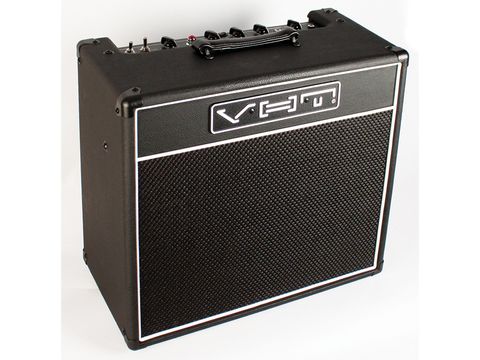 A good excuse to keep the noise down.

There's nothing more fun than plugging your guitar into 100 watts of pure valve fury and unleashing the riff beast. But unless you live in a hermetically sealed, soundproofed chamber, that's pretty impractical for everyday playing.

There is hope, though. Amplifiers such as the VHT Special 6 Ultra are a sure sign that manufacturers are growing ever more sympathetic to our domestic bliss and practice space plights.

And there's never been more choice when looking for an amp that will keep the noise abatement notices from your door without chasing away the tone too.

Positioned as a high-gain competitor to amps such as the Marshall Class 5 and Blackstar's superlative HT-5 and HT-1 combos, the Special 6 Ultra is a hulked-up version of its tamer sibling, the Special 6, and comes packed with features.

We're given two channels, Clean and Ultra; the Watts power attenuator control that's adjustable from half a watt to six watts; an 11-point Depth control knob; a three-way Texture switch and a footswitchable boost.

Add the tube-driven effects loop, line-out jack and hand-wired eyelet-type circuit board for the tech-literate to perform DIY mods and you've got quite the package, given you can pick it up and get plenty of change from £300.

Plugging in raises our first complaint, though: you have to plug into a specific input for either channel, rather than being able to switch freely between them.

Still, fingerpickers will love the bright attack from rolling back the Depth in the Clean channel. With the Depth on full, the clean tones are that bit woodier, with piano-like chime; it's a great setup for throwing jazz chords around.

The Special 6 Ultra has a pretty cool US voice for classic rock when dialling in the gain on the Ultra channel. Cranked up with a Telecaster, the Texture switch set in the middle position and the Depth around halfway, you can get some meaty vintage-rock sounds, which are a treat if you're seeking an overdriven Fender tone for garage rock.

Don't be spooked by the mention of roll-off points either - together they act as an extension of the amp's EQ. Having the Depth control set at its lowest settings trims the bass, accenting midrange and toothy treble bite.

Ironically, our only real quibbles with the sound appear when the gain is pushed full, since the tone loses a bit of its character, especially in comparison to some of its competitors. Discerning metal guitarists may well want to accessorise with a distortion pedal, which would also help compensate for not being able to switch channels by foot.

And while it seems a bit churlish to complain, given the amp's selling point, the Special 6 Ultra would struggle to be heard over hard-hitting drummers. That shouldn't be a deal-breaker, though - not at this price. Guitarists of most persuasions should find that the Special 6 Ultra provides a good enough reason not to settle for solid-state tone, just because you've got to keep the noise down.