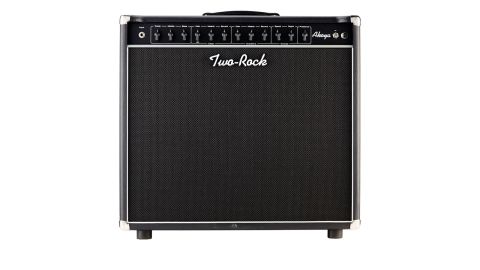 A bruiser of a 1x12 with an improved D-inspired lead channel and immense clarity for the pro stage. Top quality, but a bit steeply priced.

Two-Rock debuted the Akoya at NAMM at the start of this year, a model influenced by classic Fender 'blackface' tones but with the classic Two-Rock lead channel.

Two-Rock's Akoya is possibly the biggest, heaviest 1x12 we've ever seen. The simple black and white trademark colour scheme is broken by a thin strip of aluminium between the control panel and speaker grille.

It looks almost utilitarian, and a single carry handle on top of the cabinet to heft its 30kg is no concession for weekend warriors.

To be fair to Two-Rock, its amps are aimed at the top end of the professional market, where they're likely to be flown to venues and wheeled on stage by burly road crew, rather than hauled out of the back seat of a dentist's Mercedes. Nevertheless, it would have been nice to see a pair of flightcase-style grab handles on the sides of the cab.

The electronics are housed in a steel chassis supporting gargantuan transformers. A paxolin eyelet board holds the power supply, with another for the rest of the small components, including some smaller PCBs, which carry relays and several trim pots.

The amp is a two-channel design and features reverb and tremolo. There are two sets of gain, master and reverb controls sharing a three-band EQ, with an old-school presence feature, and speed and depth controls for the tremolo circuit.

The overall impression is one of superlative craftsmanship - it's built to handle any amount of use and deliver great tone, night after night.

The amp has an exceptionally low noise floor, with no audible hum or hiss. The Akoya's big cab and super-sized power supply deliver a huge, expansive clean sound, with headroom that outperforms many 100-watters.

The overdrive channel's bright switch adds extra sizzle for humbuckers, and there's enough gain for decent crunch. But it's a bit of work to set up, as the clean channel's gain and master volume cascade into it.

There are four knobs to balance, along with the shared tone controls, which means some compromise between clean and overdrive channel sounds is necessary.

The Akoya's dual valve-rectified 50 watts have more than enough clout to deliver effortless clean punch; once dialled in, the medium-gain lead channel sustains, sings and growls with fabulous definition.

It's real magic appears at gig levels - the response at lower volumes is rather flat compared with the unearthly sustain and vocal quality of the lead channel when it's wound up.

The Akoya is primarily aimed at pro stage use and is predictably expensive, but pro players will love this Two-Rock's clarity and bouncy response.