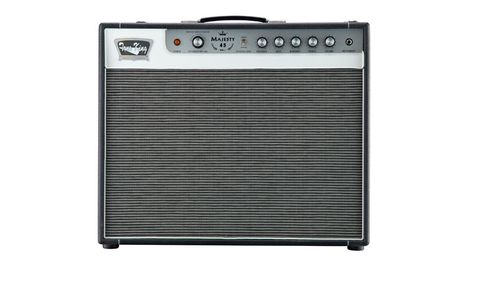 If you want the ultimate British tone experience, the Royalist is pretty much in a league of its own.

Thanks to Coda Music, Tone King - one of America's top boutique amp brands - is now available in the UK, and it coincides quite nicely with founder Mark Bartel's first design aimed at reproducing classic British looks and tones.

Enter the amp formerly known as the Majesty - after a last-minute discovery that rights to this name were already owned, the Majesty is now called the Royalist, making this review amp probably the rarest Tone King on the planet!

The Royalist cabinet benefits from deft styling and extreme attention to detail, with vintage grille cloth and an offset control panel evoking the very earliest JTM45 models. The dimensions are on the large side, however, but the Royalist is quite portable, thanks partly to its aluminium chassis, and balances nicely on its single carry handle.

The electronics are a long way from being a simple clone. Most of the small components are attached to two very high-grade printed circuit boards, with wires leading to chassis-mounted pots and switches. The wiring is extremely neat, with straight runs supported by tiny 'P' clips on metal standoffs, ensuring that wires remain where they're put. A third, smaller board supports the Royalist's built-in Ironman attenuator, which goes far beyond the simple power resistors often referred to as attenuators.

The overall impression is one of sophistication, elegant design and bomb-proof build quality. But it's an amp that is pretty enough to grace your living room, although under the skin it's as hard as nails and built to take non-stop professional touring in its stride.

It is a single-channel design with standard volume, bass, mid, treble and presence controls. There's a built-in valve-buffered effects loop, which can be switched off from the front panel if it isn't in use, and of course that attenuator, which can step down the output to bedroom levels, even with the Royalist's volume control maxed out.

Using our two go-to guitars - a Les Paul Standard loaded with PAFs, and an old Strat equipped with regular-output Duncan Alnico Pro IIs - our first impression is that the Royalist is exceptionally quiet, with practically no mains hum or hiss.

We usually expect to spend some time - a few minutes at least - dialling in the amp to achieve a decent sound, but this sounds stunning from the moment the standby switch is flipped. Powerful, woody mids are balanced by a glassy treble and a punchy bass out of all proportion to the cabinet size.

The tone controls interact smoothly and predictably, with no nasty peaks. Setting up the amp involves simply turning up the volume control to the point where it provides you with the necessary overdrive and distortion, then setting the output volume to the level you want with the attenuator switch. Using the rear-panel screen voltage adjustment, we fine-tune the response for a looser feel, after which both guitars sound so good it's almost impossible to put them down.

The Royalist isn't just another great-sounding, expensive boutique amp. Mark Bartel has managed to isolate the DNA of classic British guitar tone, then refined it, focused it and unleashed it through a 1x12 enclosure that sounds more like a 4x12.

Those players keen on recreating the sounds of their heroes will find a little tweaking is all you need to get anything from classic Clapton, Beck, Page and Hendrix to Gary Moore. It's more than just an amplifier; it's an emotional time machine that recaptures the excitement of plugging in to a great valve amp for the first time.

You can't put a price on things like that, which is just as well, because the Royalist is seriously expensive; but set against the competition, we think it's good value for money. If your goal is the ultimate in Plexi or JTM45 tone, you owe it to yourself to hear Tone King's Royalist.