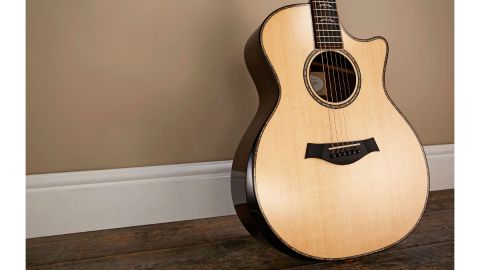 There's no doubt that the 914ce is a good looking, sweet-sounding instrument and a worthy flagship for the Taylor line.

Taylor's top-end 900 series has enjoyed a bit of a makeover since we last took a look in its direction.

Perhaps the most obvious new feature is the arm rest atop the guitar's lower bout, but there's plenty more happening under the hood here. In fact, Taylor tells us that the instrument has enjoyed something of a tonal overhaul, too, with an enhanced bass response and a sweeter midrange being the standout upgrades.

But what hits you upon opening the case is the 914's overall look; it's a thing of beauty to be sure, with an abundance of pa-ua trim, sleek curves and a deft Venetian cutaway bolstering that top-of-the-range appearance.

However, let's not run away with ourselves too much with the guitar's stunning good looks. First, let's get down to the nitty gritty and see what makes this beautiful beast tick.

Where the outside of an acoustic guitar might be optimised for its looks, the engine room of tone-producing power lies in its belly. We're talking bracing and here, and Taylor has a few cards up its sleeve in this department thanks to the innovative activities of master luthier, Andy Powers. Part of this sorcery lies in what Taylor calls its 'Advanced Performance Bracing' and the mysterious-sounding 'Relief Rout'.

In plain English, this means that the bracing has been rethought and optimised for each of the 900 range's individual body dimensions - in this case a Grand Auditorium - with an additional rout around the underside edges of the guitar's top in order to add flexibility.

Taylor has been using the latter technique since 2002 and claims this patented innovation adds additional volume and projection. We'll see if that's the case with the 914 later on. For now, let's continue our grand tour of the general construction.

The Taylor's Sitka spruce top is embellished with an edge trim that comprises koa and pa-ua, the green shell glowing like cat's eyes in bright light. The arm rest is effectively a sliver of ebony, providing a comfortable bevel for the forearm, ensuring a snug playing experience for those long practice sessions. Back and sides are Indian rosewood and although the grain pattern here is very plain, it's dead straight and uniform across the board.

It's worth remembering that the very best Indian is every bit as tonally capable as many of the other rosewoods on the market today and wholly less contentious than any of the more 'naughty' varieties that can cause you difficulties at customs. We know of one very well known artist who was forced to buy a replacement guitar to replace his own Brazilian rosewood- backed acoustic just to make sure that his US tour went smoothly, for instance.

Staying with the Taylor's reverse side, the 914's neck is a very fine-looking piece of mahogany, with an ebony heel cap at the body end and an ebony veneer to the back of the headstock - another touch of luxury.

One of the talking points around the Guitaristoffice is the Gotoh 510 tuners, finished in what the company refers to as 'aged gold'. It might sound like a piece of vintage chic, but they really do set things off nicely and complement the headstock's ebony fascia well.

The fingerboard plays host to another piece of decorative excellence in the form of Taylor's 'Ascension' position markers - basically a fleur-de-lis that gracefully unravels as it makes its way down the fretboard.

Moving on to the other end of the strings' length, there's an ebony bridge with a micarta saddle (bone is an optional extra) that also plays host to Taylor's Expression System 2, which sees three separate piezo sensors located behind the saddle as opposed to the more conventional position underneath. According to Taylor, this allows for a far more natural-sounding dynamic range than it would do if the strings' pressure was directed downwards.

Along with this the preamp has been tweaked to include a slightly enhanced gain structure which - when combined with the volume and tone controls subtly embedded into the guitar's upper bout - ensures a true plug-in-and-play experience for the user. In other words, turn up at a venue or an open-mic session and you're pretty much good to go.

To begin with, it's immediately apparent that we're dealing with a fingerstyle-friendly wider nut with the 914ce. It may only be 1.5mm above the normal 43mm, but it's something that the hand seems to recognise straight away. Taking this into account, the Taylor is a guitar that will suit both instrumentalists and happy strummers alike.

Another thing that springs to the fore is how sweet the acoustic sound of this Grand Auditorium is - it really does have a considerable array of dulcet tones on display. Furthermore, despite the dynamic range being every bit as good as you'd want it to be, there's an additional element to the sound that's difficult to describe.

It's almost like it has a natural reverb - which is, no doubt, down to the quality of the rosewood - but also a sort of compression that makes it very hard to overdrive the timbral response. Some guitars begin to break up and become harsh when played hard, but the 914 remains demure, whatever you throw its way.

It even shrugs off our attempts to anger it with some drop tunings...

Played through an amp, the sweetness remains and the simplicity of the Taylor Expression 2 preamp controls - just volume, treble and bass - means that it's relatively simple to dial up a sound that suits with very little trouble at all. We detected a very slight tendency towards a muddy midrange, but that might just be something that time and playing in will solve.