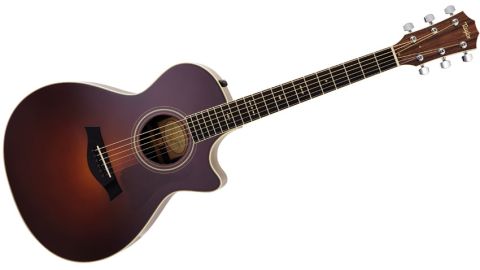 A superb all-rounder - a guitar that will accompany you from the sofa to the biggest stages effortlessly.

Taylor, despite building guitars since 1974, is still seen as the very modern opposite to Martin's oh-so-vintage style. That perception will probably never change, but this year's Taylor line features the overhauled 700 Series that, "with their vintage sunburst tops and ivoroid heritage fretboard inlays conjure a distinctively old-school Americana vibe".

The 381mm (15-inch) wide body size puts Taylor's grand concert in the same ballpark as Martin's 000/0M and, for 2012, the 700 series has an Engelmann spruce top with Indian rosewood back and sides - all solid, of course - with tropical mahogany necks, ebony fingerboards and bridges.

It has a very dark brown, gloss-finished top with a brighter orange 'sun' in the centre. A similarly hued 'burst is applied to the neck back while the rosewood is left natural gloss. This rich brown is perfectly contrasted by grained ivoroid binding around the top and back edge, and also along the fingerboard edges.

The guitar has a headstock-end truss rod adjuster and, of course, it uses Taylor's NT bolt-on neck. The fret ends sit over the binding with the standard Taylor radius of 381mm (15 inches).

The steel-string 712ce, in typical Taylor style, uses a bound spade head, and has a 14-fret neck joint with Taylor's shorter scale of 632mm (24.875 inches). Despite being quoted with a rim depth of 111.1mm (4.375 inches) it measures 108.2mm, tapering down to 89mm at the heel. The Venetian cutaway has an upward curve to its tip and the top bracing is Taylor's forward-shifted X-braced pattern with a relief rout around the underside edge and four back braces.

We have a typical Taylor neck with a 44.7mm nut width and 38.5mm string spread with 51mm string spacing at the pin bridge. Depth-wise, the 712ce measures 21.8mm at the first and 22.7mm at the 11th with a slightly more V'd profile than its nylon sibling, especially in the lower neck positions.

Electrics-wise, Taylor's proprietary Expression System (ES) is standard - two transducers, like mini microphones, are attached internally, one to the bass side of the bridge, the other buried within the neck joint. The preamp board is mounted to the bass side of the neck block directly under the three soft-rubber knobbed volume, treble and bass controls. Each has a subtle centre notch, the active EQ providing cut and boost.

Through the 101mm diameter soundhole the circuit board is easily visible and a small slide switch allows you to turn the body sensor on or off. It's shipped with it on (the switch towards the top of the guitar) and a red LED lights up when you plug in.

The larger-bodied GA (14 series) is Taylor's most popular design but this smaller GC has long been one of our favourites. The word intimate springs to mind - not only in size, but acoustic sound and projection. While many smaller-bodied guitars can really belt it out, that's not really what we have here.

What the 712ce lacks in brute force it more than compensates for in balance between lows, mids and highs. For fingerstyle, you might have to work your thumb a little harder - hybrid pick/finger technique works extremely well and strummed and flat-pick styles are effortless, not only because of that balance, but also thanks to fast, almost electric-like playability. The tonal balance, pristine intonation and slick playability take some beating.

To generalise, the ES sits between the zingier, fast attack of a typical undersaddle system and the darker, more magnetic sound of a quality soundhole pickup. The lower positions sound the most acoustic-like; as you move up the 'board, especially for lead lines, it sounds thicker and also a little less 'acoustic'. This is a real bonus for players perhaps leaning on the bluesier/jazzier side of the tracks, a bane for those so used to a piezo's often brittle higher position tonality.

The onboard controls are well placed for quick adjustments, and also in terms of the EQ's sensible cut and boost. There's no midrange control but boosting both EQs creates a mid-dip, and vice-versa.

The output of the 712ce's ES system isn't excessive - noticeably lower than our Fishman-equipped Martin reference - but we have to say the string-to-string output sounds extremely natural by comparison and the clear, clean high-fidelity sound is extremely rewarding. Turning off the body sensor has a subtle effect tonally, slightly less hi-fi and sparkly; it does, however, usefully limit body noise, which can be problematic at high onstage levels.

The steel-string 712ce is one of those dream all-rounders that feels, sounds and plays superbly. Factor in the very cool visual aesthetic, effortless playability and what is a just-about realistic price for a premium USA guitar of this quality, and you have a hugely attractive instrument.