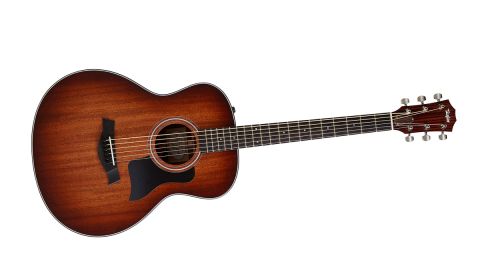 A veritable playground, its unfamiliarity adding considerably to its cachet.

Taylor has plucked this baritone from its 300 Series, one of two new special edition acoustic guitars (along with the 360E 12-string).

The baritone plunges right down to a much lower musical register - Taylor tells us that these beasties are designed to be tuned down to B, giving a tuning, bass to treble, B, E, A, D, F#, B, making it sound positively subterranean when compared to a standard six-string.

Baritone guitars seem to be enjoying a new surge in popularity, particularly among the instrumental acoustic brigade. They really can be considered as being almost a completely different instrument, when compared with a standard acoustic and have a history of popping up from time to time - anybody remember Fender Squier's Subsonic electric from around 10 years ago? But there does seem to be considerable enthusiasm for them this time around.

The Taylor 326e is essentially a Grand Symphony body shape, but whereas you might think that accommodating all that extra low end might make for a large or even bloated-looking instrument, it actually comes across as being perfectly proportioned.

If you look at it closely, you might detect the slightly longer scale length - just shy of 686mm as opposed to the more familiar 648mm - but the overall appearance is far from being ungainly. It's not particularly heavy when compared to a standard six-string, either, and so it sounds like Taylor has gone all out to make the transfer from straight acoustic to baritone as easy as possible for curious novices.

Naturally, the string gauge is altogether a different matter. Anyone who has tried to drop-tune a regular acoustic's bass string much below D will appreciate the need for a heavier alternative.

The Taylor comes fitted with Elixir baritone strings and so we find a 0.016 on the top string going down to a mighty 0.070 in the bass. So it's possible to tell from the offset that the 326e is going to feel different straight away. Whether it's 'good different' or not remains to be seen.

Back and sides are sapele, which can be much like mahogany in terms of tonal coloration, although it's much cheaper, less controversial and in good supply. Here, the two woods sit happily side by side to the extent you could easily mistake them for twins. The Taylor's neck is mahogany, once again, and is scarf- jointed at the headstock in such a way that you'd really have to look closely to notice it.

The tuners are Taylor-branded nickel and, flipping the guitar over, the headstock faceplate has the Taylor logo in the accustomed place, plus a rosewood truss rod cover.

Next in line is the Tusq nut, which looks perfectly cut to bear the transit of the somewhat larger strings. The Taylor's fingerboard is ebony with 19 medium frets and pearl dot inlays in all the usual places.

The 'e' in 326e means that there's a pickup onboard, in the shape of Taylor's famed Expression 2 system - the piezo transducer sitting behind the bridge as opposed to under it.

The most immediate difference that you notice when first playing the baritone is, as previously mentioned, the hikein string gauge that has the effect of making the fingers of both hands a little disorientated. For the left hand, this is due to a straightforward difference in basic feel, particularly on the bass strings.

But the right hand also detects a change in tension - there's an added resistance to everything you do that takes a short while to get used to. Once you're over that hurdle, though, you have to negotiate the next, which is down to tuning. Taylor recommends low B-B, but realistically, you can do virtually anything that pleases you.

Think of Pat Metheny, who chooses to tune his baritone so that the middle two strings are tuned up an octave (with the appropriate sympathetic string change, obviously!).

But we'll leave the more adventurous side of things alone and stick with what we're given and so, after a bit of experimentation, we settled on C-C, as this felt - and sounded - good to hands and ears. After a bit more settling in, we dropped the bass down to A at one point and the guitar still responded perfectly. So it's very much the player's choice.

As far as response is concerned, the baritone is bags of fun. It's necessary to adjust your style - open-string chords sometimes tend to sound a little too muddy, for instance - but all of your instrumental endeavours are rewarded with a rich, muscular sound palette that really is a blank canvas for your creativity.

When put through a recording set-up, the Expression 2 system copes well, although we're wondering if the addition of a magnetic soundhole pickup might pep the electric sound of the 326e a little. However, what's already present is more than adequate, making this instrument a potential force to be reckoned with in your acoustic armoury.