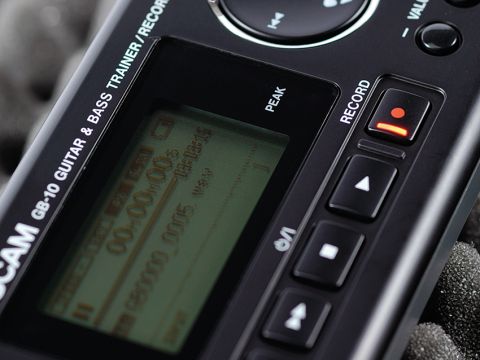 Tascam's range of phrase-trainers has proved very popular over the last few years and has evolved to reflect the latest audio technology.

Phrase trainers based around a CD player are still very much a part of the Tascam range, but the latest offerings such as 2007's MP-GT1, the first in the range to utilise mp3 technology, rely on a computer connection to provide the music that you wish to play along with or learn.

The GB-10, with four small rubber feet attached to its base, is designed to sit on a tabletop, but is compact enough to fit easily in your hand.

It's portable, running off two AA batteries, but can also be powered from a computer's USB bus or Tascam's 5V power adaptor.

Operation is very simple, as all the regularly used functions have dedicated front panel controls, which are all logically laid out for ease of use.

Music downloaded from computer, or any fresh recording you wish to make, is stored in the GB-10 on an SD or SDHC card. You can use cards of up to 32GB with the unit, but the 2GB card supplied is sufficient to store over three hours' worth of your own 16-bit, 44.1kHz (CD quality) recordings.

Mp3 files or 16 and 24-bit wavs for playback can be loaded into the GB-10 from your computer via a USB connection - the GB-10 appears as a drive on your desktop and transferring files is a simple drag-and-drop process.

Once loaded, you put your headphones on, plug in your guitar and play along with any audio files. The guitar input's gain is set by a rotary control on the side of the unit, but you also get a 'balance' feature that lets you set the optimum level of the track you may be playing along to against your guitar sound.

If you want more than just your dry guitar sound, there are onboard effects that can be applied to it. These take the form of 10 presets that cover a bunch of styles and sound really good through the headphones, actually making you want to play, which is the whole point of a unit like this.

Each of the presets is constructed from three effects blocks - amp, compressor and FX (a choice of chorus, flanger, phaser, tremolo, autowah and delay) - all with a range of adjustable parameters (including reverb for the amp). There are 10 user memories for saving your own edited sounds.

If you just want to play guitar for a bit of silent practice, there's an onboard metronome with adjustable speed to help you keep time.

It's also dead easy to loop a section of the music for constant play and there's a handy 'flashback' facility during playback that lets you jump back a few seconds into the track with a single button-push.

One feature that is absent is a centre-cancelling function as found in previous Tascam units - it was often a bit hit and miss depending on how the song had been mixed, but nevertheless sometimes useful, so it's a shame to see it go.

The digital recorder element of the GB-10 is designed so that you can record your guitar playing quickly and easily. It features a set of standard transport controls and will start recording with a single button press when inspiration strikes.

To store new ideas you can just record all your playing, but if you don't want to use up memory you can simply put the machine in record ready mode and start playing, then quickly hit the record button if you recognise that you've just played something special - your playing will be instantly captured, as it continuously records two seconds of audio into a buffer.

A hands-free start to recording is also possible using a dynamically triggered auto-record function that will start recording the moment you start playing.

An overdubbing facility is also available - you can record as many overdubs as you want onto any audio file, a new file being created each time. A useful compositional tool when knocking new songs into shape.

This unit offers excellent facilities not only for learning and practising music, but also for composing it and keeping a record of it.

If you play electric guitar or bass, you could load a GB-10 with some favourite tracks, stick it in your guitar case along with a lead and be guaranteed a quality practice experience wherever you may be, as well as the chance to record any new ideas before they slip away. Every guitarist should have one.