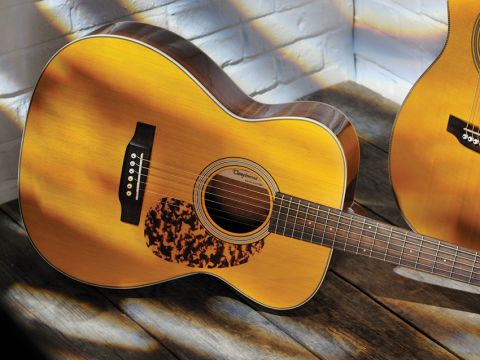 The Tanglewood TW40 O AN is a cracking piece of kit. This little guy's construction, playability and tone will make it plenty of new friends.

We all like to beat chords out of a big dreadnought or super jumbo size acoustic guitar, but they don't always deliver the goods when you want to drop your plectrum and switch to fingerpicking.

You might get bags of bass and a bit of treble or vice versa, and that's not ideal when you want each note to shine. That's where small-bodied acoustics come in.

As artists as diverse as country pioneer Jimmie Rodgers, current Brit folk favourites Mumford and Sons and Eric Clapton have discovered, smaller 'folk-size' acoustic guitars leave the big boys in the dust when it comes to pumping out a focused, well-balanced tone when you're playing fingerstyle.

The Chinese-made Tanglewood TW40 O AN 'pays tribute' to the small body 000 and OM models of the Golden Era of Martin guitars that ran from 1930 to 1945.

The Tanglewood TW40 O AN is based on the classic Martin OM (Orchestra Model) guitars of the 30s and 40s, and is a paid-up member of the company's new Sundance Historic Series.

The slight extra scale length when compared to the likes of the Recording King RO-127 helps to maintain the integrity of the guitar's tone when you use alternate tunings like drop D and open G.

The back and sides are laminate mahogany, and the guitar boasts a vintage-style V profile neck. The Tanglewood's V morphs into more of a cool C profile from around the 10th fret to the heel. That attention to detail is also evident in the playability of the TW40, which is about as good as you'll find on any acoustic guitar.

Each fret on the guitar's rosewood fingerboard is perfectly seated and dressed. The Elixir Nanoweb Custom Light .011 to .052 gauge strings are set at a medium action making the guitar comfortable to play, yet absolutely buzz- and rattle-free.

As previously mentioned, the Tanglewood has a neck that joins the body at the 14th fret. You can although it can be a stretch for shorter digits. That said, noodling above the 12th fret isn't really the point of this style of guitar.

Don't let the compact frame of the Tanglewood fool you. The TW40 is loud. The overall tone is best described as bright and punchy; you can thank the mahogany back and sides for that.

Pick the strings hard with the bare meat of your thumb and fingers and you'll be amazed at the way the notes seem to fly like missiles from the guitar's soundhole.

If you need a small-bodied guitar to cut through the chatter in a pub or intimate club setting, the Tanglewood will fit the bill.

This guitar can sound a little brash when played with a pick, but we'd expect that side of its character to mellow out a bit as that solid spruce top matures.

Practical details such as the second strap button (on the treble side of the neck heel) and the vintage spec yellow tortoiseshell pickguard that protects the gloss finish top add to the guitar's appeal.