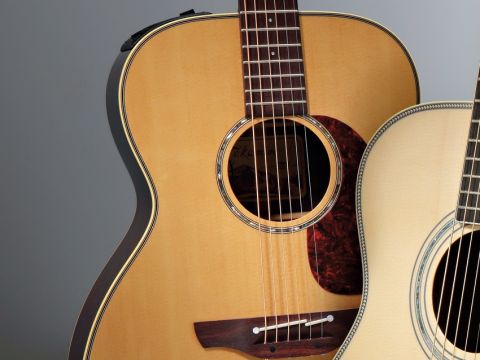 A great-looking OM from Takamine.

The trouble is that the trusty budget box you started out on no longer cuts the mustard, and you're ready to splash out on a much better-quality guitar - almost certainly an electro - and are budgeting around £1000, or even a bit more.

The most obvious candidates might be, say, a dreadnought or grand auditorium, but at the same time you're rather drawn to the idea of a mid-size instrument. You'd be right to be so. OMs and 000s - so-called 'folks' - can be excellent all-rounders.

They're more comfortable to handle, without necessarily sacrificing much in the way of unplugged performance, and are often easier to gig, tending to be less prone to feedback.

There's also the inkling that a cutaway may adversely affect acoustic sound quality, which it can. What are the non-cut options, then? Well, the choice isn't exactly huge, but this model - from a major, well-respected name - could be just the ticket.

It offers an adaptable CTP-2 CoolTube system, with three- band mid-sweepable EQ. It has an aux input, so you can add a secondary sound source - for example, a magnetic soundhole pickup. It also includes a system-muting auto-chromatic tuner, which, usefully, can also be recalibrated.

Timber-wise, the Takamine has laminated sides, with a gloss body and satin neck.

Although having shallow 107mm-deep rims, this Supernatural OM's body lines are otherwise pretty similar to the Breedlove Atlas Retro OM/ERe's, and the guitar shares a simple elegance of trim.

Coachlined cream body binding is given multi-ply dark/white fibre purflings front and back, augmented by a similar back centre strip, while the spruce top carries an abalone rosette and the brand's hallmark rear-strung bridge with split saddles. The way the string path is recessed behind the saddles ensures a good break angle.

Typically for a guitar of this style, the bridge string spacing is a tad tight, at 53mm, but it doesn't feel unduly cramped for fingerstyle.

Acoustically, this is like a shy version of the Breedlove. The texture, openness and easy sustain are similar, but the dynamics and outright volume aren't quite as bold and the sweetish highs have a slightly wispy edge. It's an agreeable sound, nonetheless.

The CTP-2, without dialling in some tube, is quite springy - treble needs to be applied sparingly to avoid brittle highs and the mid-range merits some cutting to oust nasal hardness.

This guitar falls firmly within the classic Martin OM/000 genre. With its slim, fast neck, this Takamine can be regarded as a general-purpose contender, although that's not to say it isn't a capable picker: the tighter string spacing isn't much of a deterrent.

Sound-wise, the Takamine is a conundrum. It has an engaging acoustic sweetness and, powered, the CTP-2's valve contribution is a valuable trump card. But beyond that, unless you like the slightly excited tonal signature, the EQ does need work to extract more natural sounds.

Build quality and value? We've no big complaints about the former: workmanship here is impressively tidy, and as for value, Takamine throws in a hard case. An extremely well-delivered instrument.