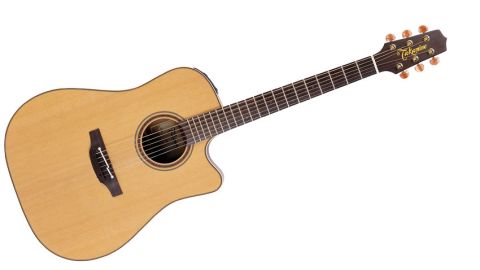 A well-made and finished electro, perfectly capable of meeting the needs of a demanding gigging musician.

Takamine has been producing quality guitars since 1962. In addition to its annual Limited Edition models, the Japanese company is perhaps most noted for its stage-friendly electro acoustics.

For many of us, however, Takamine's various Japanese-made Pro Series ranges over recent years have become somewhat overwhelming, not to mention confusing. However, simplification is on its way. Brand new for Takamine's 50th year, we have the 1, 2 and 3 Pro Series guitars aimed at the gigging musician. Series 4, 5, 6 and 7 guitars are to follow.

The product names illustrate the simplification. P, for 'Pro Series' (a catch-all name that indicates Japanese-made guitars), is followed by the construction style: 1, 2 or 3. Then there's the shape: D (dreadnought), J (jumbo), M (orchestra model), N (NEX), F (FXC) and the smallest NY (New Yorker, parlour-style). Finally, a C is added for cutaway models, a 12 for 12-strings, while the sole nylon-string gets an additional N. So in the P3DC (reviewed here), we've got a Pro Series Dreadnaught with a cutaway.

It comes in a good-quality, Takamine-branded hardcase featuring a generous neck cradle, beneath which is a gigging-friendly interior compartment that will comfortably accomodate a strap, set of strings, spare battery, capo and basic tools.

Our review model features a pinless rosewood bridge. For anyone who's ever suffered the misfortune of a broken string onstage, pinless bridges allow a replacement to be fitted in super-quick time without the aid of any tools. The two-piece saddle is made from bone.

The control panel offers three centre-indented EQ sliders - which control the low, mid and high frequencies with a +/- 5dB range - and a volume slider. A single push-button engages the tuner; push once to activate, push twice for muted tuning when amplified and a third time to switch off. The tuner is also capable of being calibrated to frequencies other than standard A440 and auto-shuts down after a few minutes if no signal is received.

Simple and uncluttered in its design, the solid cedar soundboard bears minimal decoration and no pickguard. Unobtrusive purfling and coachlining match the concentric-ring soundhole rosette. The two-piece solid sapele back and (laminated) sides are divided by a rather unflattering and somewhat plastic-looking centre strip - we can't help but think that a contrasting-wood centre strip would have been a more aesthetically pleasing choice; same story with the heel cap.

However, the two-piece mahogany neck has a slim high-performance profile that is super-fast to play and will appeal to hands that are used to electric guitars. The now-familiar Takamine headstock is home to gold-coloured, Takamine-branded tuners, complete with what Takamine call 'amber' buttons - Werther's Original might be more accurate.

The rosewood fretboard is of good quality and accommodates 20 beautifully finished frets, while wood dot-in-dot inlays complete the adornments. Takamine has a good reputation for build quality, and the P3DC illustrates this with high levels of fit and finish. It's a solid and sturdy guitar, and consequently, it's a little heavier than you'd expect, but we were left with the feeling that Takamine has built this guitar to stand the rigours of the stage - no complaints from us.

Takamines generally have a signature sound - a focused, clear, bright and punchy output backed up with plenty of tonal depth. The P3DC fits well into this bracket. While not being the loudest £1K dreadnought we've encountered acoustically, the P3DC offers a balanced tone and admirable levels of both projection and sustain. Easy access to the upper registers showcases the guitar's clear, bright highs. As you'd want and, indeed, expect from a dreadnought, low-end is heavy and strong, too.

When amplified, the CT4B II impresses. A wide range of tones can be dialled up, with each frequency controller offering good levels of scoop and boost. The simplicity of the CT4B II will appeal to many, since it combines straightforward amplification with straightforward operation. No tricks, no confusion.

As its makers intended, this model offers plug-in-and-go performance, excellent playability and is very well-built. We predict the reorganised and well-priced Pro Series guitars will prove highly successful for Takamine.

There's nothing wrong at all with its current guitars, except that the numerous ranges - Traditionals, Naturals, Supernaturals and the rest - aren't immediately obvious in terms of their differences, and despite trying, we're still confused by the model names.

Organisation aside, if you're a gigging musician and you need a pro-quality stage guitar, then not for the first time in its history, Takamine makes for a very sensible place to start - and quite probably end - your search.