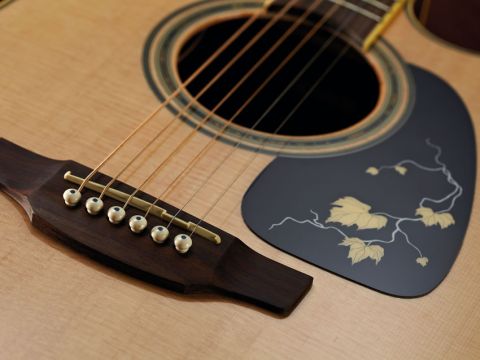 A slice of the extraordinary, without the matching hiked price tag - an excellent all-rounder.

It's no surprise that this cutaway dreadnought grabs your attention immediately: the decorated pickguard mirrors the fingerboard's 'growing vine' motif in mother-of-pearl, while a three-leaf cluster sits at the 'board's 12th fret in a gold/ white/gold pattern. This understated design also shows on the pickguard, although it does appear to be painted on.

Aside from the inlay, the 'board is devoid of position markers, but you do get black dot markers on the cream edge binding, providing sufficient reference.

The neck profile is a consistent 'C', finished in gloss like the rest of the guitar. This particular example has a broad flame pattern traversing the bass side of the neck, adding a little more wow factor.

Also visible is the stacked four-piece heel, which is capped in more of the cream plastic that edges the top and back of the body's purfling, along with a single thin stringer adjoining the mahogany back panels.

Another classy Limited Edition feature is the soundhole rosette. The inner circle sandwiches a gold-textured fabric with sporadic flecks of black and orange between two cream circles. Aside from that, it's a pretty conventional guitar, with scalloped 'X' bracing under the solid spruce top, while the back and sides are laminated.

Set-up is good: a nicely cut Corian nut and intonated saddle with a relatively low action, although string spacing at the bridge is fairly regular at 52mm. Of course, this is an electro, and features the commonly used Takamine TP4T preamp that, along with three-band EQ and volume, includes an onboard tuner, although it lacks any feedback-busting notch filtering or phase control.

A healthy tonal richness emerges from the guitar, with good sustain and typical dreadnought depth, but with good note separation, while the top-end sounds very clear. It certainly stays well out of the 'boxy' and 'dry' camps.

Amplified, too, the EG50TH is no slouch. We found a little additional treble was necessary to replicate the acoustic performance's clarity, while the onboard tuner is fast and accurate in operation. In many ways, it's typical Takamine: an extremely competent acoustic and electro.