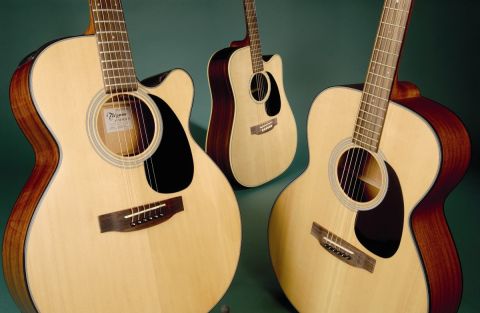 The price is pitched at a pretty spot-on level for what you're getting.

But there may be some confusion as residual stock of certain discontinued G Series models will still be on sale while lower-priced Chinese-built replacements start appearing, some with the same model codes.

Very similarly constructed to the dreadnought, this cutaway NEX mini-jumbo's differences are either obvious or can be referenced in the spec check.

The EG220SC offers a three-band black/white soundhole rosette, black body binding with matching heel cap and seam inlays for the back and sides, and an even-coated gloss body.

The TP4 preamp follows the same new look format as the TK-40, but is paired down to the absolute basics.

With matching neck dimensions and the same well-judged neck geometry, the EG220SC is also almost identical to play, but many find this compact NEX body style more ergonomic.

This guitar's acoustic tone doesn't benefit from direct comparison with a Takamine dreadnought. As a smaller bodied guitar it is less boomy, but there's generally less 'oomph', and little else that would sway you.

However, if a lighter, smoother, more chirpy tone is what you want, you have this option. Amplified, typically, the sound is immediately more generic and more similar to a Takamine dreadnought's electro tone, but you can still detect that this guitar sounds inherently thinner and relatively brighter.

With only EQ to play with, you'll be glad the TP4 preamp offers some functional midrange contouring and treble pruning.